Africa is a playground for all ages. There’s the Sahara Desert, River Nile, Serengeti, pyramids, camels, white rhino, shark diving, dictators, eucalyptus forests, coral reefs and…Indians! The second largest continent in the world, Africa has had relations with India for over 3000 years and is currently home to over 3 million people of Indian origin. Of the 54 countries, Indians live in at least 46! The majority live in South East Africa with significant populations in South Africa, Kenya, Uganda, Madagascar, Mauritius, Malawi, Mozambique, Rwanda, Seychelles, Zambia and Zimbabwe. In the North, there are communities in Algeria, Egypt, Libya, Morocco, Sudan and Tunisia. To the West in Benin, Burkina Faso, Cape Verde, Côte D’Ivoire, Gambia, Ghana, Guinea, Guinea-Bissau, Liberia, Mauritania, Niger, Nigeria, Senegal, Sierra Leone and Togo. There are also small communities in Angola, Botswana, Cameroon, Central African Republic, Chad, Democratic Republic of Congo, Equatorial Guinea, Ethiopia, Guinea, Gabon, Lesotho, Namibia, São Tomé & Principe and Solomon Islands. The earliest accounts of the Indian presence on the eastern coast of Africa are found in the Periplus of the Erythaean Sea, written in the first century AD by an anonymous author. Through this and other writings, it is evident that Indian merchants had been plying their trade through the Indian Ocean since the days of ancient Babylon, and had even established trading posts along the coast of East Africa. The major wave of migration into Africa by Indians came as a result of colonisation. Indians were forced and taken as indentured workers to colonial empires in the nineteenth and early twentieth century as a result of bondage of debt and sent to labour at plantations, most of them sugar. Each country however, has its own unique reasons as to how Indians arrived. Join us as we discover, celebrate and learn more about who we have become. Our Global Indian Africa journey has begun.

THE HISTORY OF INDIANNESS | THE SUGAR WAR

CROSSROADS OF MY IDENTITY – MADE IN MALAWI WITH HAROON SACRANIE

A LESSON IN KENYANNESS | THINKING AHEAD WITH VIMAL SHAH

RETURNING FROM THE EDGE – MY BATTLE WITH ALCOHOLISM

MY GRANDFATHER AND ME | ELA GANDHI – MADE IN SOUTH AFRICA

THE TIME FOR PEACE WITH ELA GANDHI

THE SOUTH AFRICA THEY DIDN’T WANT YOU TO KNOW ABOUT

MEET THE GLOBAL INDIAN WHO IS AFRICANISING MUSIC – ALISHA POPAT

The President : Mr. Cyril Ramaphosa The Republic of South Africa Sir, “IF YOU HOLD THE POWER, YOU BEAR THE RESPONSIBILITY” You will be soon required, as the president, to deliver your “STATE OF THE NATION ADDRESS” – an address that is meant to inspire and motivate the country to do better, to live better […]

He was dimunitive – quite affable – oftentimes quite rumbunctious, but he was never boring – never. I had the distinct honour and privilege to have met the “Arch”, together with the Reverend Frank Chikane and the Reverend Beyers Naude, while being a student at the University of the Western-Cape, during the turbulent days of […]

I dare say again, our duty of Indianness must go beyond the tricoloured flag of India.  Unlike structured religions where Pope-like figures lead congregations, as people of Indian origin we are led by the laws of the lands we now reside in and equally, need to place as much love and attention to our fellow […]

Julius Malema, who believes he is a law unto himself, and one that the writer considers to be an absolute racist at heart, is skating on thin ice. At a press conference, the swaggering Malema unleashes a tirade against “Indian” South Africans, claiming that there is an “Indian cabal that is taking strategic positions in […]

*The madness and futility of the Israeli-Palestinian conflict* Wars serve no purpose – they destroy humanity – they exacerbate human suffering to extreme levels of intolerability. Wilfred Owen, in his 1918 poem, “Futility”, exemplifies what a wasteful by-product war has become of man’s inhumanity to man. The raging Israeli-Palestinian conflict is a heresy and must […] 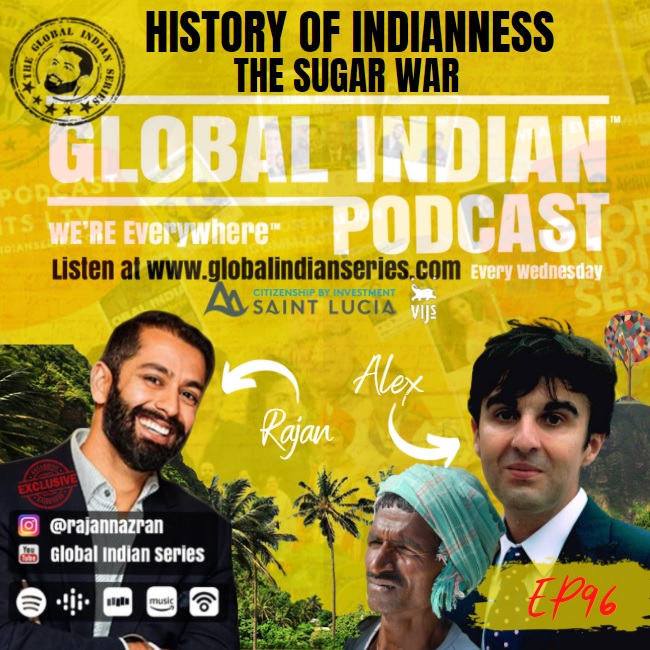 THE HISTORY OF INDIANNESS | THE SUGAR WAR

Today marks the second voyage of the History of Indianness.  In this episode we look back at the almost forgotten world of Indentureship and the silent war that was Sugar. With painstaking research, we bring together a formidable group of historians, for…