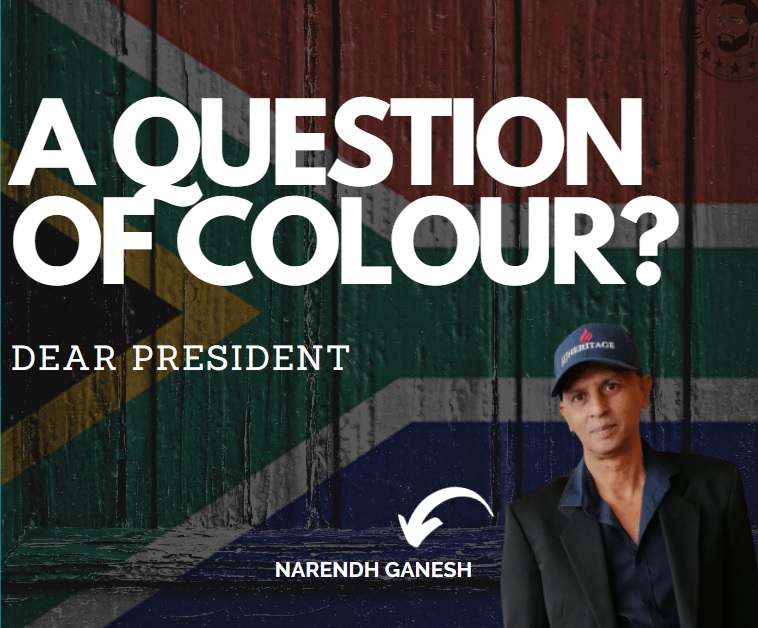 The President: Republic of South Africa

IS SOUTH AFRICA BECOMING A “BLACK” COUNTRY – OR HAS IT ALREADY BECOME ONE?

ARE “BLACKS” THE ONLY CITIZENS WHO ASCEND TO SENIOR POSITIONS?

I write to you with a caveat that this correspondence, while invoking the ideology of race, it is not meant to incite or foment the racial narrative.

Generally speaking, most people are very guarded or tend to be politically correct when addressing the matter of race in South Africa – only because of the sensitivity of the matter as it relates to our past.

But, there comes a time when we need to discard the mantle of niceness and challenge head-on the realities that confront us as a nation.

We must speak truth to power now more than at any other time.

I never saw my country in racial terms post-1994, albeit that her very foundation is premised on the veiled ideology of race.

Our freedom, particularly that of those who were dispossessed and discriminated against, came at a price, but what have we done with that freedom?

I will be blunt – I do not expect you to react, respond or retaliate to this correspondence – after all, you are in a power struggle currently to ensure that you retain the helmsmanship of your party so that you can retain your presidency in 2024.

Our constitution is predicated on the notion that every citizen, irrespective of any differences of any kind, becomes a composite ingredient to the recipe of one nation, one people.

It recites the aspect of a “non-racial” society – of “we, the people”.

The harsh reality is that that is a fallacy.

Some sporting events, such as the Africa Cup of Nations in 1995, the Rugby World Cup in 1996 and the FIFA Soccer World Cup in 2010, hosted by South Africa, rekindled the philosophical but false belief, even if for a moment, that South Africa was indeed a united country.

These events, while showcasing to the world a country in unison invited the patriotism of most citizens – but it was simply a facade. In fact, time stood still during those heady days of euphoric madness as we rallied behind “our team”.

But when it was all over, and the sun had set on the horizon, what happened?

The ANC, which promised so much, but it has delivered very little in terms of real progress.

Its members labour repeatedly on the ills of apartheid, as if it is a default excuse, when exposed to the inadequacies and failures of its own machinations in meeting the promises that it makes at vote harvesting season.

Let me hasten to add that I do not diminish the effects or the ills of apartheid in any form and its comtemptuous affront to human dignity deserves eternal condemnation and abhorrence.

But, I am at pains to believe that South Africa is on the mend where it matters.

We are diving deeper and deeper into the rabbit hole of reverse apartheid.

I refer particularly to the idea of transformation and equity.

Of course, this was needed to rehabilitate the wrongs of what happened to the majority of the citzens in South Africa.

I ask repeatedly, when will transformation end?

Is it when all aspects of South Africa becomes “black”?

Every aspect of bureaucracy, for example, is gravitating to a racial aspect, that is to say, most management positions are now becoming the preserve of our “black” compatriots, even if their competencies are glaringly deficient.

The SAPS and education are two areas, amongst many others, where I have noticed that every senior position is becoming “black”, despite having employees of other races who are much more adept and capable of holding such positions.

There are certain ranks in the SAPS whereby citizens classified, white, Indian and coloured will never ascend to, and many have stagnated in their current positions for decades, even though thier track records are exemplary in terms of capability and competence.

The same applies to education – many classified other than “black” will never be able to rise beyond their current status only because they are, ironically, prejudiced by their racial classification.

It is no wonder that South Africa is facing a brain drain that could have have offered so much to her progress and development.

Capable employees of other races are being sidelined, overlooked and generally discarded to appease a concept that was once lauded but is now becoming a monster that is devouring the very fabric of our society – and indeed our future.

Transformation, in the South African context, is fast becoming a one trick pony that is bound to destroy this country, simply because its fundamentl premise is based on the very aspect that good men and women once fought against – race and racial prejudice.

How reflective is your cabinet of the South African demographic or for the matter the demographics of the KwaZulu Natal provinvcial cabinet?

Sir, it is demanded of you – although this is a long shot – to impress upon yourself, your colleagues and the powermongers within your ranks to see the bigger picture and to strive for the greater good of “we, the people” and not let race trump that “new dawn” that you once so merrily referred to.

I trust that this correspondence, if read, might evoke in you a moral obligation to ensure that every citizen is treated equally, fairly and justly as is a pre-requisite of any free and democratic society based on the fundamental principle of meritocracy.

Let me know your thoughts in the comments