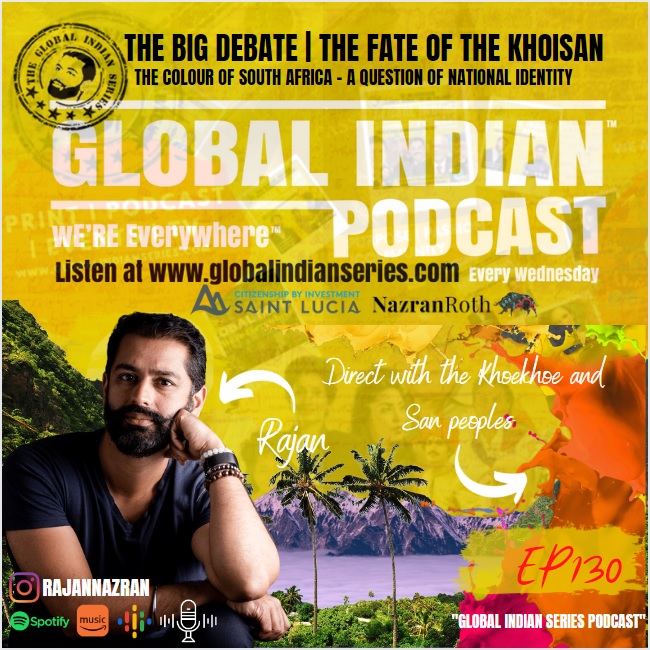 How do you define Africanism? Is it based on melanin, tracing ancestorial roots, or is it based upon how the Government of the day views you?  Further still, in a world of “woke” and intensely capitalistic politics, how are indigenous communities and tribes treated and how do they define themselves in the structure of newfound borders, associated flags and polarised politics?

In this podcast, I delve into the topics at hand in South Africa, a country divided by its past and still torn by brutal displays of ethnic bias.  I am joined by 11 respected leaders of the Khoisan community from across the entire region, as we tackle the elephant in the room and uncover the dangerous narratives that have reduced a once “rainbow nation” into a “zebra nation”.

South Africa is home to over 1.5 million people of Indian origin. The community have faced several threatening challenges. Although many are proudly South African, in 2021 they were reminded once more of the ideas surrounding nationalism as riots erupted in Durban that challenged the ideas around national identity. During this unrest, the silence from the globe was deafening. The Global Indian Series was one of the first to respond and mobilised Governments globally to condemn the violence.

Click here for our coverage on South Africa: https://globalindianseries.com/?s=south+africa

Khoisan /ˈkɔɪsɑːn/, or Khoe-Sān (pronounced [kxʰoesaːn]), according to the contemporary Khoekhoegowab orthography, is a catch-all term for those indigenous peoples of Southern Africa who do not speak one of the Bantu languages, combining the Khoekhoen (formerly “Khoikhoi”) and the Sān or Sākhoen (Saake in the Nǁng language).

The San were formerly called Bushmen,[3] (from Afrikaans Boesmans from Dutch: Boschjesmens); and the Khoekhoen were formerly known as “Hottentots“,[4] speculated to be a Dutch onomatopoeic term referring to the click consonants prevalent in the Khoekhoe languages. However there is no evidence of this etymology.[5] The language of both peoples are grouped under Khoesān. Early Cape settlers would ply Khoekhoen with liquor as an inducement for them to perform a ritual dance.[citation needed] The lyric accompanying the dance sounded in Dutch ears like hot-en-tot.

Sān are popularly thought of as foragers in the Kalahari Desert and regions of Botswana, Namibia, Angola, Zambia, Zimbabwe, Lesotho and Northern South Africa. The word sān is from the Khoekhoe language and simply refers to foragers (“those who pick things up from the ground”) who do not own livestock. As such, it was used in reference to all hunter-gatherer populations of the Southern African region who Khoekhoe-speaking communities came into contact with and was largely a term referring to a lifestyle, distinct from a pastoralist or agriculturalist one, and not to any particular ethnicity. While there are attendant cosmologies and languages associated with this way of life, the term is an economic designator rather than a cultural or ethnic one.

Khoekhoen is an ethnic designator. It refers to several populations which speak closely-related languages and are considered to be the historical pastoralist communities in the South African Cape region, through to Namibia, where Khoekhoe populations of Nama and Damara people are prevalent ethnicities.

These Khoekhoe nations and Sān are grouped under the single term Khoesān as representing the indigenous substrate population of Southern Africa prior to the hypothesised Bantu expansion reaching the area roughly between 1,500 and 2,000 years ago.

Many Khoesān peoples are the direct descendants of a very early dispersal of anatomically modern humans to Southern Africa before 150,000 years ago. Their languages show a vague typological similarity, largely confined to the prevalence of click consonants. They are not verifiably derived from a common proto-language, but are today split into at least three separate and unrelated language families (Khoe-Kwadi, ǃUi-Taa and Kxʼa). It has been suggested that the Khoekhoeǁaen (Khoekhoe peoples) may represent Late Stone Age arrivals to Southern Africa, possibly displaced by Bantu immigration.[6]

My purpose is simple, to build a living encyclopaedia of the human experience of the community and a safe mooring ground for open discussions, whether you are an NRI, Indian Diaspora, person of Indian origin (PIO) or a fan of South Asian anthropology, what I do is bring people and communities together.

I do this by plunging into the human experience of being a person of Indian origin (PIO), taking a second look at the countries we now call home and tackling the conversations we need to know more about.