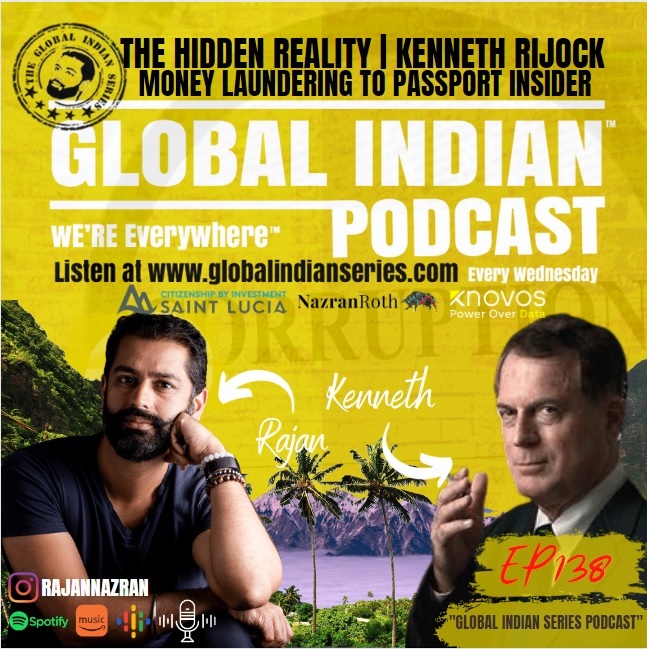 Imagine committing a crime and purchasing a passport of a foreign nation to circumvent justice. Or in some cases, to hide in plain sight by changing the very documents that define your identity, giving you a clean slate to travel the world and to destinations where you may have been a known threat. For some, this seems like the start of a criminal novel, but for my next guest, this is a hidden reality that is active in the Citizenship by Investment industry that has the potential to de-stabilise the EU, UK, USA & Canada.

Kenneth Rijock is a reformed career money launderer who has investigated many Caribbean countries for their connection to illicit funds and those that could pose a threat to national security by a scheme that has been termed as “cash for passports”. We discuss the major concerns and what the Global Indian community need to be aware of when considering locations.  We also eye-in on some of the corrupt practices being used and question where the money raised has been spent, especially in a time of deep economic crisis.

Special thank you to our friends in the EU that posed these important questions.

DISCLAIMER:  Any views or opinions represented in this podcast are personal and belong solely to the invited guest. They do not represent the people, institution or organisations that the owner may or may not be associated with in a professional or personal capacity. Any views are not intended to malign any region, country or Government.

BACKGROUND:   Family emigrated to United States from Russia in 1923. Native-born US citizen.

1980-1990: Adviser to narcotics trafficking organizations in United States and Canada.

1992-2006:   Independent Contractor: assisted US and Canadian law enforcement agencies, and US financial institutions with money laundering and financial crime investigations.

2006-2011: Financial Crime Consultant at World-Check, London, UK, Lectured in over 100 countries, wrote over 5000 financial crime articles on company website, and served as expert-in-residence on money laundering.  Due Diligence and Enhanced Due Diligence.

In these roles, he has worked on a range of investigations and stories on issues such as efforts to tackle the trafficking of African children and inequalities in the mental health system to efforts to diversify British politics and the rise of black tech entrepreneurs.

A journalist whose experience includes print, radio, and television news, he has won two Race in the Media Awards for his work and a MIND award for his reporting on mental health. Before joining The Voice, he was a producer with BBC Radio  5 Live, creating and producing the weekly magazine show Word Up!

Vic has appeared as a regular newspaper reviewer for BBC News 24 and BBC London and has also written for publications such as the Daily Mirror, New Statesman, the Big Issue and Mental Health Practice. He sits on the board of the Society of Editors.

In this capacity, he recently helped develop the Society’s diversity, inclusion, and belonging hub which provides advice, case studies and resources on the issue of diversity and inclusion in the media.

He is the co-author of the book The Voice: 40 Years of Black British Lives.