Lest we forget. The Coolie Odyssey

Lest we forget. The Coolie Odyssey 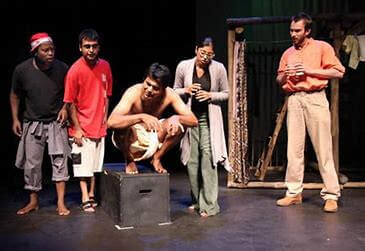 Lest we forget. The Coolie Odyssey– by Rajesh Gopie

Shashi Tharoor’s book, Inglorious Empire, offers a detailed  and harrowing look at the cost of British colonisation on India. However, Tharoor’s sumptuous work does not extend to the aspect of human capital taken out of Indian during the period of Indenture that accounted for hundreds of thousands of Indians shipped out to various parts of the globe between 1850 and 1917. There is yet a figure to be placed on this human value and its impact on traditional villages, communities and families inside India as well as in the colonised territories Indians found themselves in. Simply put, it is still out there.

Perhaps this is a liminal space where artists, dramatists, filmmakers and the like can move into and divert from the academic and written word to the physically creative; one that makes the visceral experience of mind and body tangible, where human loss and value can be measured through the emotional and shared human compassion.

As a South African descendant of Indentured fore fathers and mothers, I grew up knowing almost nothing of the stories of my lineage. This was compounded by the fact we were living under apartheid and were largely muted victims to an insidious education system that emphasised white western education at the cost of subverting indigenous and minorities histories. Only in adulthood practicing as a young actor and playwright that the history of my forefathers began to occupy a prominent curiosity for me.

Whilst there was a decent amount of academic writings on the subject, it was the gapping lack of the personal narrative that filled me with an emptiness. Where was the embodied human experience that other cultures and races have in their art, films, theatre? How was it that I knew more about the history of Israel and the Holocaust, the bombing of Britain, America independence and its founding fathers, the Dutch settlers from Holland and the French revolution but hardly anything of my own?

I wanted to rectify this to some end and set out to craft and create The Coolie Odyssey, a play, an unflinching look into the lives of a few so that we may feel a connection to the many who lived and died under the system of Indentured labour. It is an unashamed attempt to bridge the remoteness of one’s truth and historical identity, a scream down the chocked annals of history  to find the personal through the creative and give names to my forefathers and mothers, re-enact their possible relations and situations so that the emptiness could begin to be filled. Ultimately to account for their human value through catharsis.

My mantra in this endeavour was,

What stories do we tell our children and bedtime, what songs do we have on our lips?

“Inspired by the 1995 novel Red Earth and Pouring Rain by Vikram Chandrah, The Coolie Odyssey is a many-layered epic drama that covers various highlights in the history of South African Indians from 1890 to 2002, looking at Indian life, religious ideals and local politics. It tells the stories of a group of men, women and children who initially sign up for seven years indentured labour in what was colonial Natal in 1890 and then become part of the population. The story is recorded by a typing monkey (with memories of previous human incarnations) in the yard behind the house of a descendant living in modern day Durban and the narrative moves back and forth in time and location, from India, to Durban, to a sugar-cane plantation on the Natal north coast. His story unveils the life of Ramlal Kilhari, an indentured labourer, who arrived in Durban in 1888 and follows Ramlal as he searches for identity, belonging and salvation against the backdrop of those pioneering colonial times. The production casts a light on a very influential minority group that was part of the social fabric, but uncertain about their future in the New South Africa at the turn of the new millennium.”

2020 marks the 160th anniversary of the first arrival of Indian Indentured workers in South Africa and I am making the recording of the play available online and can be streamed from any part of the world. Through this offering I hope to reach out to fellow descendants of Indenture across the globe so our stories contribute meaningfully and our rightful place and value to the lands we made home is never diminished.

“A staggering production with great beauty and pathos. Stirring, this classy production brings to life the significant role of Indians in the struggle for South Africa and the creation of a national identity, one which is only complete when all its people are included. The Coolie Odyssey is a major step to this end. Its scope is broad and appealing to all people anywhere”.

The play was invited to be performed in India under the auspices of the International Centre for Cultural Relations (ICCR) and was staged to packed audiences in Delhi, Calcutta and Mumbai before returning to be performed again in South Africa.

What stories do you tell your children at bedtime?