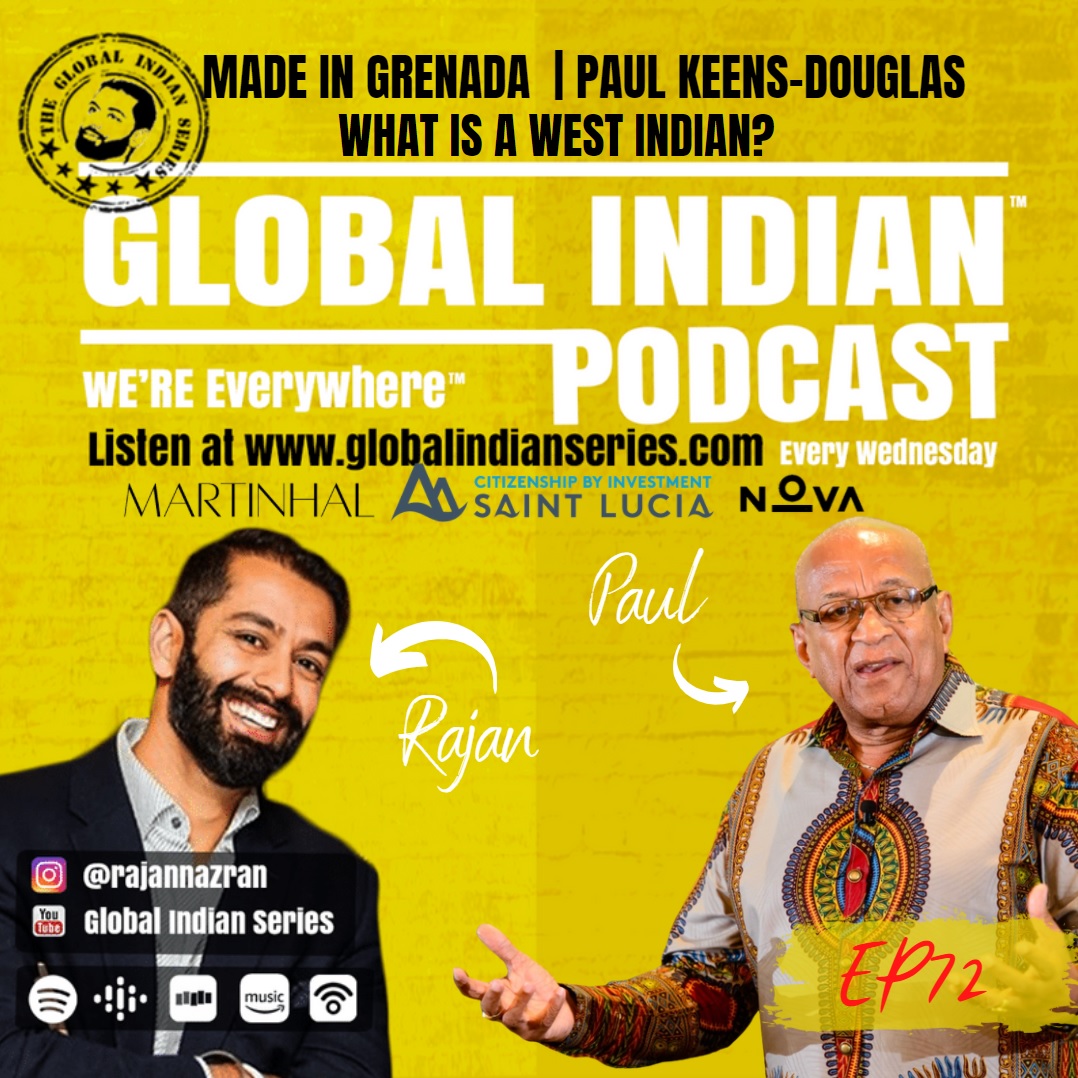 In today’s episode, Rajan travels to the West Indies to meet Paul Keens-Douglas, one of the most popular Indian-origin storytellers and comedians of the Caribbean who always brings the house down!

A native of Trinidad who spent most of his early years in Grenada, his serious and dramatic tales give an authentically and rhythmically wonderful look at what Caribbean life is really like and what being West Indian means in the world today.

What does being West Indian mean to you?  How does your racial identity impact you and others?  Share your comments below.

If you like what we do, want to share a story, or support our work, please visit www.globalindianseries.com.

About Paul Keens-Douglas:
Known as Mr.Tim Tim in the theatrical world, Paul Keens-Douglas is one of the most eloquent and best-known raconteurs and social commentators in the English-speaking Caribbean. Born in Trinidad on 22/9/42, he spent his early childhood in Grenada where he attended the St. George’s Methodist School and Presentation Boys College.

He holds diplomas in Commercial Broadcasting and Radio/TV Production from Announcer Training Studios and RCA Institutes of New York, a B.A (Honors) Degree in Sociology from Sir George Williams University (Concordia), Montreal, Canada, and has done two years post-graduate work at the University of the West Indies, Mona, Jamaica where he was also Sub-Warden at Irvine Hall.

Active in drama from an early age, he has a wide and varied background in Theatre and Creative Arts. Since his return to Trinidad in 1974, he has focused on highlighting the Trinidad & Tobago and Eastern Caribbean vernacular in dramatic presentations and advertising, both as writer, performer, and producer. Over the years he has become a leading exponent of the oral traditions of which his annual Tim Tim Show and Carnival Talk Tent have become hallmarks.

A self-published author he has to his credit nine volumes of work, fifteen albums, three videos, sixteen CD’s and two DVD’s. His work has been featured in many anthologies and well-known international publications, has been highlighted on the BBC, Canadian and American radio and television, and throughout the Caribbean media and has been translated and published in German and French Creole. His collection Tanti at de Oval was recently translated and published in Japanese by Japanese writer Chikae Taniguchi.

The characters he has created such as Tanti at de Oval, Vibert, Timultaneous, Sugar George, Tingalae, Bobots, Dr. Ah-Ah and many others have become an indelible part of the Caribbean literary landscape. Only recently his well-known story Tanti at de Oval was included in the MCC anthology of cricket verse A Quiet Hush.

Other Cricket Anthologies that feature his stories include: Macmillan: Caribbean Lives-Brian Lara; ArtsEtcInc.: Shouts from the Outfield ; Peepal Press: The Bowling Was Superfine.

The remarkable thing about his work is its wide appeal, an appeal that covers all classes and age groups, but at the same time is wholesome and family-oriented. What’s more, the manner in which he presents his material makes him easily understood by foreign audiences in both the business and artistic arena.

In ‘Voices in the Century’, a special millennium edition of the CARICOM Perspective, Paul along with Louise Bennett of Jamaica was highlighted for their contribution in shaping the course of Caribbean development in their area of cultural concern. Indeed Paul Keens-Douglas is seen more as a regional personality rather than belonging to any particular territory. A true Caricom man, he was part of the special presentations marking the 30th Anniversary of Caricom in Montego Bay, Jamaica and its 40th Anniversary at Chaguaramas, Trinidad in 2013.

A former Creative Director with McCann-Erickson (T’dad) Ltd he works within the advertising industry developing creative concepts, programs, promotions and events planning for a variety of clients. His company Keensdee Productions Ltd focuses on management and staff training, with an emphasis on inter-personal and cross-cultural communication. As such he has become a much sought-after Conference Presenter and Motivational Speaker.

Interested in getting involved in building the world’s largest living encyclopedia on the community? Whether you want to become a patron, buy us a chai in a new location or have your story shown, simply get in touch via our website, we would love to hear from you. www.globalindianseries.com

Are you a global Indian that needs to go global? You may be interested in our articles on citizenship by investment and global residency options, including Golden Visa planning through to the leading funds to consider. It’s a definitive guide for all global Indians to read on what you need to know and what you must avoid when looking to participate in investment migration and golden visa planning.