A REGION THAT CHANGED A NATION : GUY JOSEPH | MADE IN ST LUCIA

A REGION THAT CHANGED A NATION : GUY JOSEPH | MADE IN ST LUCIA 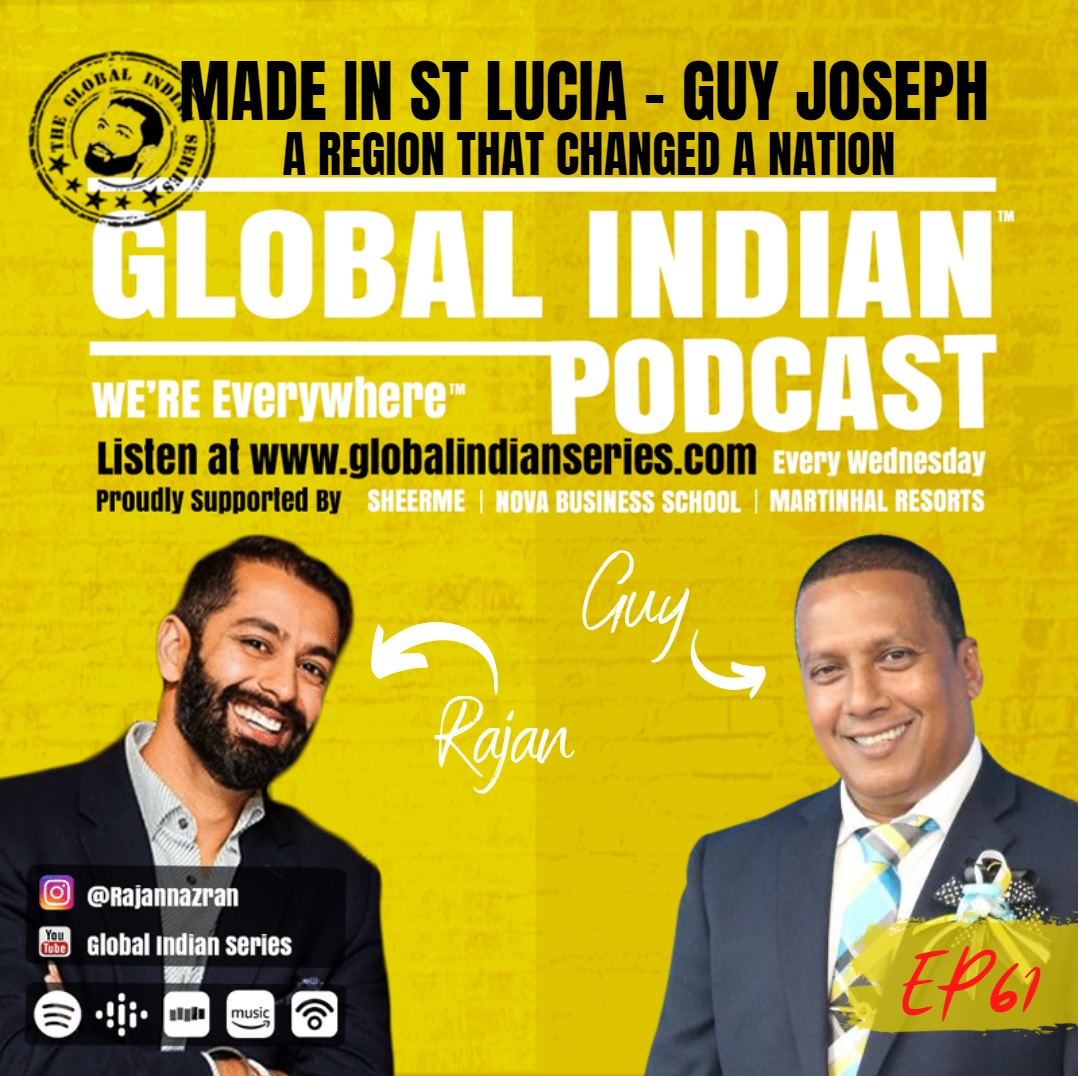 In today’s episode, Rajan travels to St Lucia in the Caribbean to meet with politician and renowned social custodian Honourable Guy Joseph, Minister for Economic Development in St Lucia and person of Indian origin.

Approximately 5000 persons of Indian origin came to Saint Lucia in the 19th century as indentured labourers and Guy Joseph’s ancestors were no different. Today, most have assimilated with the local population and Guy tells us about his own upbringing, life in beautiful St Lucia and opens up about the challenges of what it’s like to be a minority politician and how he has become the number one target of scrutiny by the opposition!

Thank you to our guest Guy Joseph for the insightful conversation and candid exchange.

If you like what we do, please consider sharing, liking, and subscribing. Its our way to grow – www.globalindianseries.com

Mr. Guy Joseph a very successful entrepreneur was born in 1966. He was raised in the community of Forestierre, the seventh of ten children, where he still resides today. Mr. Joseph begun his formal schooling at the Forestierre Methodist Combined School. Unfortunately, during that era not many young boys and girls were fortunate enough to attend secondary school and so he did not. After a few years of working in the mechanical industry Mr. Joseph attended the Sir Arthur Lewis Community College where he obtained a certificate in Construction Mechanics. A few years later he attended the National Research and Development Foundation (NRDF) completing two levels of accounting; Basic Accounting and Intermediate Accounting. Mr. Joseph is also certified and trained in Management and Empowerment. He has done a wide range of training programmesand certification in Preventative Maintenance.

Mr. Joseph graduated from Monroe College with a Bachelor’s Degree in Business Management and University of Lynchburg with a Masters in Business Administration.

Before politics Mr. Joseph enjoyed giving back to his community, church, sport and the environment. For the past twenty years he has sponsoredtheGood Friday Tape Ball Competition and headed the youth department of the Forestierre Seventh Day Adventist Church. He has been a major sponsor of various community activities including community clean ups and sporting tournaments. In his younger days, Mr. Joseph was the founding President of the Forestierre Drama Group, performing both regionally and internationally.

Mr. Joseph has pursued the gamut of employment and entrepreneurship. He began as a banana farmer, soon after he realized his preference for entrepreneurship and branched off on his own. Some years later he then went into the mini bus service. Mr. Joseph has had many successful businesses including furniture manufacturing, trucking and heavy equipment services, auto parts and  tyres.

In 2006 he entered into elective politics as a candidate for Castries South East and a member of the United Workers Party who was in Opposition. He won the seat and his party won the elections.

In Government, Mr. Joseph served as the Minister for Communication, Workers, Transport & Public Utilities (2006 -2011), Chairman at ECTEL – Council of Ministers and in 2011 he served as an opposition Member of Parliament for Castries South East.

In 2016 he again won for the 3rd 5 year Term and is presently serving in the cabinet as Minister for Economic Development, Housing, Urban Renewal, Transport and Civil Aviation. He is also on the Board of Governor for the Caribbean Development Bank (CDB) and St. Lucia’s representative for Eastern Caribbean Telecommunications Authority (ECTEL) on the council of Ministers.

He is Married and a lover of cricket.

He is now preparing to contest his 4th Election.

My name is Rajan Nazran Chief explorer for the Global Indian Series, the official platform for people of Indian origin (PIO), because let’s face it, we are everywhere!

Interested in getting involved in building the world’s largest living encyclopedia on people of Indian origin? Whether you want to become a patron, buy us a chai in a new location or have your story shown, simply get in touch via our website, we would love to hear from you.  www.GlobalindianSeries.com

If you liked this podcast, you may enjoy the following: (podcast options will change)

THE SOUTH AFRICA THEY DIDN’T WANT YOU TO KNOW ABOUT (globalindianseries.com)

Are you a global Indian that needs to go global?

You may be interested in our articles on citizenship by investment and global residency options, including Golden via planning through to the leading funds to consider. It’s a definitive guide for all global Indians to read on what you need to know and what you must avoid when looking to participate in investment migration and golden visa planning.

If you like what we do – please consider sharing, commenting, and subscribing. Its our way to grow.