Many of the global indian diaspora is dispersed through immigration. We are everywhere! Our parents and grandparents often tell stories of how they arrived in the country with nothing but a few pounds and a dream. We often laugh at this exaggerated statement but when we stop and realise the sacrifices they made, we are left in awe.

Growing up, I wanted to be a lot of different things, my love of animals meant I wanted to be a vet, then I realised I’d have to look at blood so that swiftly changed! My love of reading and learning languages pushed me to want to be a translator, and then as I grew older, that changed. My love of feminism and equality meant that I then wanted to be a human rights lawyer or work in a profession that made a difference. Due to the trials and tribulations of our family, all of these dreams were achievable to me, my parents encouraged all of my passions and ambitions even though they weren’t the typical “Doctor, Lawyer, Engineer” jobs and even though they didn’t fully understand my choices. It never occurred to me that mine was the first generation in our family that had the freedom and privilege to dream purely for ourselves.

When I asked my parents and in-laws what they dreamed of being when they were younger, I was met with surprise. Dreams? They were a commodity, a currency that was almost foreign to them. They laughed and said that they didn’t have time for such things. Their “dreams” were starkly different to mine. They were to escape their homeland and to build a better life for their families, both back home and here. They had to put their aspirations on hold to fulfil their “duties”. It’s a level of generational pressure that we, thankfully, will never know.

We do, however, carry over, a degree of “immigrant guilt”. This is the notion that as our parents sacrificed so much for their children, we are bound to repay them for their sacrifices. To meet their extremely high expectations for what we should do to be successful. To help them “keep face” among family and the broader Indian community. To help them prove that their sacrifices were not in vain. Even though I was incredibly lucky and had supportive parents, I cannot say that as a child this didn’t irk me. It was frustrating to be the eldest child of immigrant parents and have wider family/friends compare you to their child or judge your choices. As I grew older, I had more open and honest conversations with my parents. When I decided to study politics at University, my parents were initially skeptical. Their skepticism was out of fear. Fear because they wanted me to be successful and the conventional paths towards success were the following: Doctor, Lawyer, Engineer. Fear because they worried that I’d live a life of struggle as they did. Fear because of the lack of representation in my chosen field, they hadn’t seen anyone that looked like us have successful careers that were going against the grain. Yet even though they had fear, they wanted me to be happy and luckily that was the overriding emotion.

The changes of University

When I’d come home from uni, excited to discuss my lectures, they saw first hand how their support encouraged me. It created a stronger bond with my family, who even now often call me to their daily dose of political news (and the odd heated debate about Indian/US politics!) Seeing me be successful did help change their perspective of “ideal” careers, but more importantly seeing me happy and in a career I enjoyed changed their mindset. By the time it came round to my younger sisters’ career choices, the skepticism had turned into excitement and support. Beautician? Sure! It meant free massages and beauty treatments for life, not a bad deal! Pursue a degree in Business? Great! Can’t wait till you’re a mogul! I’m not taking all the credit for the shift in my parents’ outlook, but being the eldest does come with its fair share of struggles! It’s definitely a relationship where sometimes you have to parent your parents as well as parenting your siblings but I wouldn’t have it any other way!

When I stop to think about it, I am living in a safe, developed country with my loved ones, being able to pursue my chosen career and follow my dreams. Perhaps THIS is my immigrant parents dreams coming true.

Whilst here – take a listen to our podcast on from Refugee to the House of Lords – The man who changed Britainhttps://globalindianseries.com/ep35-from-refugee-to-the-house-of-lords-the-man-who-changed-britain/

For our 50th podcast today, Rajan travels to Canada to meet Vikram Vij, an Indian-born Canadian chef, cookbook author, investor on Dragons Den, and mentor to the masses. Today’s session is a rare insight into the man behind the ingredients, an open book …

A LESSON IN KENYANNESS | THINKING AHEAD WITH VIMAL SHAH

In today’s podcast, Rajan travels to Kenya to speak to one of Africa’s leading entrepreneurs and philanthropists, Vimal Shah Chairman of Bidco Africa who speaks to us about Kenyanness, the perception some have on his country and the deep misconceptions t…

Do we need India to define our Indianness? And even within the notion of Indianness, how much of our identity is redefined by the countries that we find ourselves in?In today’s podcast, Rajan travels to Trinidad & Tobago to speak to Dr. Sherry-Ann Singh…

Drug addiction amongst the Indo-South Africans is an unspoken issue and over 60% of crime in South Africa is drug-related.  In today’s episode, Rajan travels to South Africa to meet Gerald Moodley, a former narcotics addict who has experienced their dama…

My name is Alpesh Patel and when my family and I were told that we had to leave the country with nothing but the clothes on our backs, the news hit us like a brick wall. Never would we have thought this could have happened to us, of all people, but the reality was that […]

Many of the global indian diaspora is dispersed through immigration. We are everywhere! Our parents and grandparents often tell stories of how they arrived in the country with nothing but a few pounds and a dream. We often laugh at this exaggerated statement but when we stop and realise the sacrifices they made, we are […]

Loneliness is an worldwide public health matter. This means many people across the globe have felt a lack of social connectedness for years. South Asian mental health is a concern for many health and social care services in countries across the world. Key factors here are stigma preventing help-seeking behaviours in brown people, isolated elderly […]

Our journey in 2020 with Rajan Nazran

A special thank you to our growing Global Indian Family. In a year when identity politics divided nations, we stood together. In solidarity for something far greater.In a year where we were forced to stay apart, we connected the globe.In a year that, the mainstream media chose virtue signaling. We decided on the power of […] 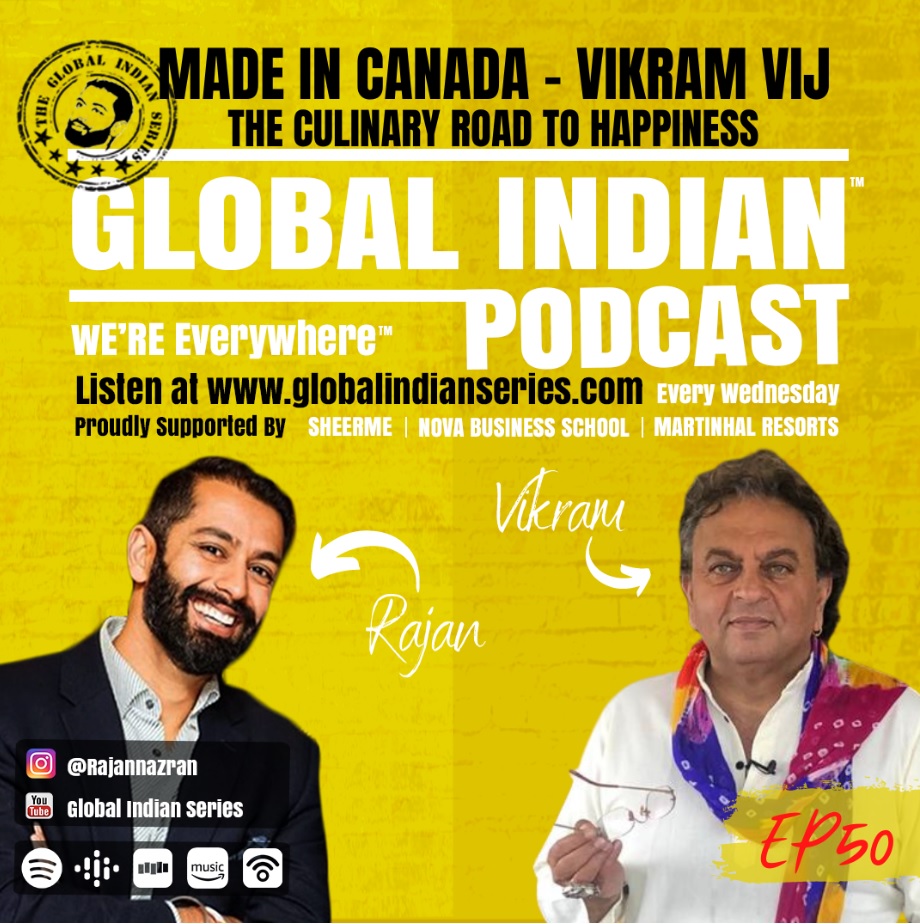 For our 50th podcast today, Rajan travels to Canada to meet Vikram Vij, an Indian-born Canadian chef, cookbook author, investor on Dragons Den, and mentor to the masses. Today’s session is a rare insight into the man behind the ingredients, an open book …