Exposed: Thousands of innocent people thrown out of the UK for cheating in English Language Tests

Exposed: Thousands of innocent people thrown out of the UK for cheating in English Language Tests 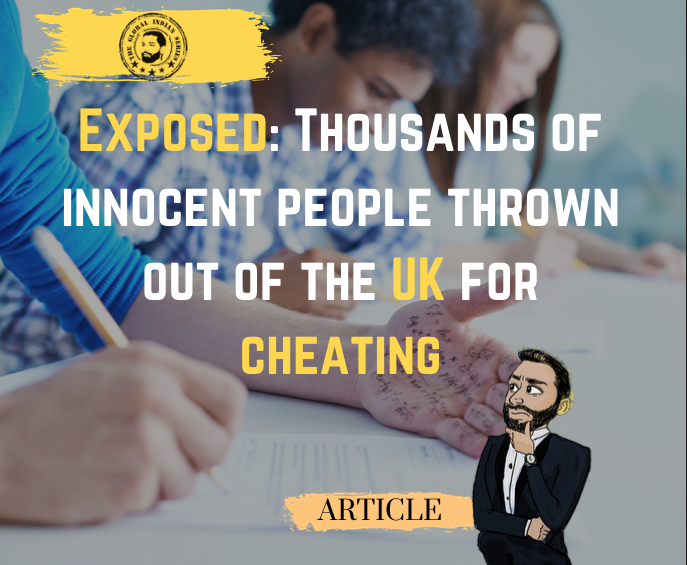 According to a BBC investigation, the Home Office has been trying to kick out people for cheating based upon the findings of a testing organisation (ETS), despite evidence that its date is profoundly flawed.

The figures make for shocking reading. Some 2, 500 people were deported and a conservative estimate of 7, 200 were shown the door after the ETC accused them of cheating in a test it set and marked.

Many protest their innocence in Britain and are locked in a battle both to tear their names and to stay in the country.

The Government called charged ETS with task of rooting out cheating after a 2014 Panorama investigation revealed that revealed two London test centres were running fraudulent exams so people could falsely obtain a pass they could use to apply for a visa.

ETS discovered cheating on an enormous scale in over 100 independent test centres a round the UK. However, doubts have been cast of the validity of the ETS’ judgement and indeed proof has emerged that a number of people had been wrongly accused.

BBC investigators also discovered that the ETS’s Investigators were also given eyewitness testimony that some tests were faked with a method known as “remote testing”, which lawyers believe cast doubt on ETS’s evidence.

Despite the flaws in its methods, the ETC has the full confidence of Government.

When Wahidur Rahman was accused of cheating, he protested his innocence. It would take him 7 long years to clear name. He says of the Home Office “They should hang their heads in shame for not apologising, not just to me but all the other innocent students.”
The Bangladeshi national goes on to say: “My whole world fell apart when I read a letter from the Home Office six years ago, accusing me of using a proxy in my English test, which I had sat to renew my visa.” The irony is that Mr. Rahman has an excellent grasp of English, better than that of many Britons.

Rahman been working with many other affected students over the last few years, campaigning with the charity Migrant Voice for justice.

7 years of his life have been wasted. Being accused of deception by the UK government means he unwanted by Bangladesh and no company would employ him. Indeed, even getting a visa to go to another country proved difficult.

Most painful of all, his own mother did not believe in his innocence because “it’s a common fallacy in Bangladesh amongst our older generation that the UK is the bastion of truth and fairness.”


No Right to Appeal

The Home Office summarily deported many of those accused of cheating without an opportunity to defend themselves.

Sadly, the affair has caused rifts between applicants and their families. The latter believed that were cheats because the British Government would not make such grave allegations without good reason. How deluded they were!

At the end of their investigation, the ETC claimed 97% of 58,000 Toeics (Test of English for International Communication) taken in Britain between 2011 and 2014 were judged suspicious – 33,663 were invalid and 22,476 questionable.

Labour MP Stephen Timms takes the view the Home Office and the Home Secretary at the time (Theresa May) accepted the ETs’ findings because of the Home Office’s zeal to deport as many illegal immigrants as possible. This is a grave charge. If so, the Government threw out thousands of people, knowing that many of them may well have been innocent.

That no Home office officials queried the ETS’ conclusions shows either great ineptitude on their part or the heavy hand of politics. The fact is thousands of were summarily deported because of highly dubious evidence.

A Chapter of Accidents

Those who stood accused of cheating were not given their test recording them until 2017. It was then that the full scale of ETS’ incompetence was brought to light. Most people who received a test recording found it didn’t contain their voice. The ETS had blundered. Were the files not named correctly? To date, we do not know what went wrong.

Mistakes abound: Nomi Raja, although the Home Office were unable to deport him despite their best efforts, was banned from working studying or using the NHS. He has subsequently discovered that there were a number of mistakes on his record: firstly, they said he was Bangladeshi (he is in fact Pakistani) and that he took the test in Leicester, when in fact he did so in London. And yet it has taken him 5 years to prove his innocence in the courts.

While there is clear evidence of widespread cheating and indeed the collusion of many test centres, the fact remains that many of those who were falsely accused could have been spared the ordeal had the ETS’s methods and findings been sound.

Despite admitting many people have been wrongly accused, the present Home secretary, Priti Patel, has done nothing to put the matter right and stands by the ETS’ findings.