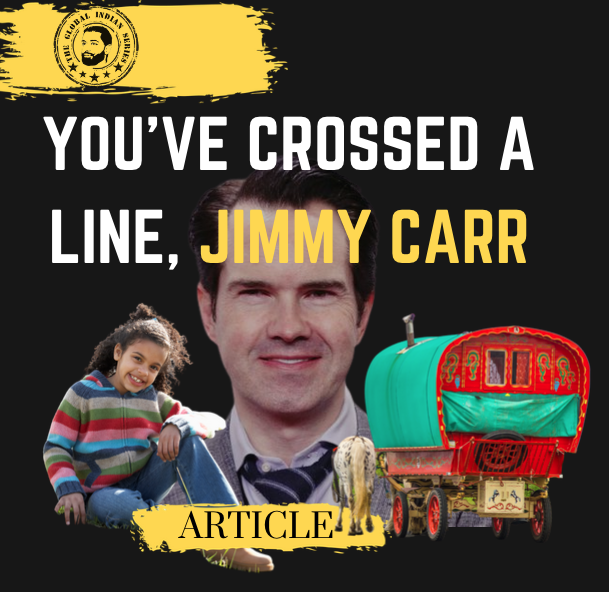 It was with horror that we at The Global Indian reacted to your highly insulting and profoundly unfunny joke about the Roma. Your referred to it as a ‘career ender’ and your words may well prove prophetic. All right minded people are appalled by your comments.

You are an educated man with a keen wit. Why you decided to tell this maladroit gag is beyond us. Was it simply a lack of judgement on your part? Was your intent to shock? Or was it an ill-conceived experiment to test ‘Cancel culture’ and how quick to take offence we have have become?

If we take this as a working hypothesis, the experiment failed and served no person.

Genocide is no Laughing Matter

If you were deliberately courting controversy, then it was in very poor taste. Good comedy can shock but this, alas, was not good comedy. Since when is it okay to joke about genocide?

You have described the gag as ‘edgy as hell.’ Such merely trivialise the murder of thousands of Roma in the Nazi death camps. You knew full well it would draw the ire every right thinking person in the world. Surely, there are better ways of making a statement about ‘cancel culture.’

Your justification for telling the gag is woefully unconvincing: “ Like everyone in the room knows, 6 million Jewish people lost their lives to the Nazis during the second world war. But a lot of people don’t know, because it’s not really taught in our schools, that the Nazis also killed, in their thousands, Gypsies, homosexuals, disabled people and Jehovah’s Witnesses.”

This apparently ‘the educational’ value to which you allude. Not only does this explanation insult the intelligence of your audience, it feels insincere. Many people do indeed know that between 200 000 and 50 000 Roma and Sinti people were murdered by the Nazis Roma people call it ‘Porajmos’, meaning ‘the devouring’.

Historians estimate that as much as 25-50%of the entire Romani and Sinti population of Europe were murdered. Those scars remain today with throughout the Roma diaspora.

The culture Secretary, Nadine Dorries, has suggested that new laws could be introduced to prevent the broadcast ono such comments. This, we think, is a step too far. If you want to ruin your career, then you should be allowed ti do so. Abhorrent though your joke was, she should be free to tell it.

Far better to take up the health secretary, Sajid Javid’s suggestion to boycott you. Doing so would send a far better message to purveyors of hate and bigotry than recourse to the law.

You are not racist, Mr. Carr. Of that we are sure. But your experiment has failed miserably and we hope you will repent of your mistake. If you do so, we hope you can return to our screen a chastened man.