What’s in a name? The Politics of Naming

What’s in a name? The Politics of Naming 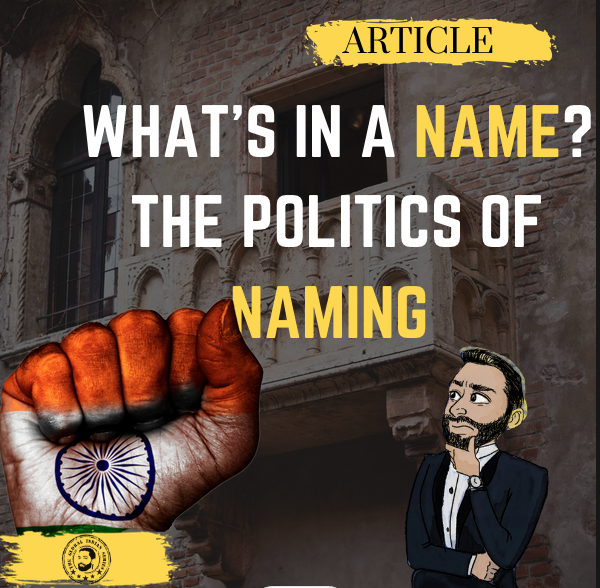 “What’s in a name?” as Juliet so famously asks. ‘”That which we call a rose/ By any other name would smell as sweet.”

Or would it? Names matter. They enshrine identity. Indeed, they enact it. Names tell their own (his)stories and silence others. They are not mere labels. They carry a freight of associations which cannot be ignored. As the old adage has it, history is always written by the victors. By the same token, one could argue that it is the powerful who decide what something shall be called.

To name something is to control it.

In Genesis 2:19, God invites Adam to name every animal:

“So the LORD God formed out of the ground all the wild animals and all the birds of the air, and he brought them to the man to see what he would call them; whatever the man called each living creature was then its name.”

Names hold power, none more so than that of a country. And make no mistake changing a name of a country or a city is a political act. The metaphysics of Naming and renaming does us a good dal bout identity, place, and power.

Turkey is changing its name to “Türkiye” As far as ‘rebrands grow’ this is fairly modest. However, in ditching ‘Turkey’ is making a statement. President Recep Tayyip Erdogan said the new name “represents and expresses the culture, civilisation and values of the Turkish nation in the best way”.

The change reflects more than the way in which Turks pronounce Turkey. Some say it is to avoid association with the bird. Others to the American vernacular for something that is an abject failure. According to Selim Koru of the Foreign Policy Research Institute, these associate genuinely irk Edogan. One wonders if the Greeks are exercised by Greece and ‘Grease’?

Joking aside, the change is really about Turkish nationalism and Turkey’s standing in the world. It sends a signal: Turkey is a foreign power to be respected. Turkey is expected to report its new name to the UN in due course.

Should India henceforth be called Bharat? After Independence, The constituent assembly adopted two official names: India and Bharat.
In 2020, a private citizen filed a petition in the Supreme Court seeking to amend Article 1 of the Constitution and drop “India” as the name of the country keeping only “Bharat.” It failed, but there are some (particularly of Hindu nationalist persuasion)

The word ‘India’ is not Indian

The word ‘India’ is not Indian. It is to the Persians that we owe the word. It derives from the name of the river Sindhu ( the Indus) and has been in use since the time of Herodotus in the 5th Century B.C.

Later ‘Hind’ acquired the suffix ‘stan’ (meaning country or region in Farsi), thus becoming ‘Hindustan.’ This was later adopted by the Mughal Emperors.

Bhārata was selected as an alternative name of India in 1950.
Opinion is divided as to its exact etymological derivation. It derives either from Dushyanta’s son, Bharata, or Rishabha’s son, Bharata, from India’s (sic) two great Sanskrit epics the Mahabharata and the Ramayana.

Ironically, ‘bharata’ is an epithet of Agni, the fire God of Hinduism, whom the Indo-Aryan tribes introduced to India. Derived from an Indo-European root, the Sanskrit word agni (“fire”) is related to such other forms as Latin ‘ignis’

Since 1950 India is one country with two names, though in truth to the rest of the world India shall always remain ‘India.’

Although other countries have changed the names of their cities (one thinks of Peking to Beijing, Volgograd to Stalingrad and back again to Volgograd, Saint Petersburg to Leningrad and back again to Saint Petersburg etc.…) India has taken renaming to a whole new level. Since partition, it has renamed dozens of cities and states in an attempt to purge India of all vestiges of the British Raj. To this end, Bombay became Mumbai, Cawnpore Kanpur, Mysore Mysuru, Calcutta Kolkata, Madras State to Tamil Nadu, Mysore to Karnataka.

And so on and so forth.

You might have thought the process would have ended here. On the contrary. Moves to change India’s place names moves on a apace, much to the dismay of many Muslim Indians, many of whom fear their history is being systematically erased.

In 2018, The BJP changed the name of Allahabad to Prayagraj — which alludes to the fact that it is a place of pilgrimage to Hindus. Legend has it that the Mughal Emperor Akbar the Great (1542-1602) was so impressed by the strategic location of the site that he ordered a fort be built in 1584, which he called Ilahabas or “Abode of God”, later changed to Allahabad under Shah Jahan.

The move has been widely seen as further evidence of the rise of Hindu nationalism in India. Many Muslims remain upset at the decision and see it as an attack on their very identity. Many feel they are increasingly being marginalised.

The name change was largely the work of Hindu firebrand Yogi Adityanath, a monk, member of the BJP, founder of a Hindu Youth militia and chief minister of India’s most populous state Uttar Pradesh. A zealous nationalist, he believes India is first and last a Hindu country. “We cannot let Muslim invaders from centuries ago define us today!” Adityanath told a rally in 2014.

Such language verges on demagoguery and he fact remains that India is a land of many faiths. Hindus make up 79.8% of India’s population and Muslims account for 14.2%; Christians, Sikhs, Buddhists and Jains account for most of the remaining 6%
Is it not written in the Maha Upanishad that “the world is one family” and are not these words engraved in the entrance hall of the Parliament of India?