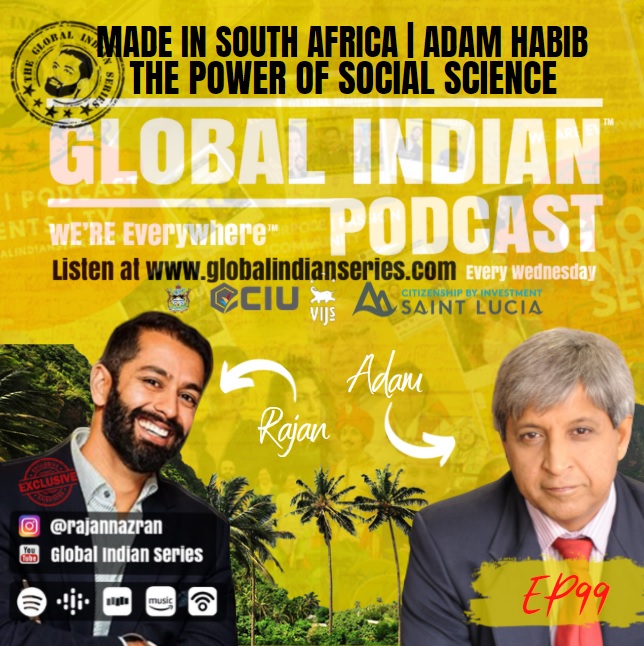 As voted by our global audiences: This week we invite Professor Adam Habib, academic, researcher, activist and now director of SOAS university to our virtual studios.  We discuss his own journey and controversies as well as tackle the ideas of identity, nostalgia, and our need to belong.

Themes include his Memon routes, his take on the inequality in South Africa and the true cost of social change.

A special thank you to SOAS University in supporting this voyage.

Adam Habib is an academic, researcher, activist, administrator, and well-known public intellectual. A Professor of Political Science, Habib has over 30 years of academic, research and administration expertise, spanning five universities and multiple local and international institutions.

Prior to his appointment as Director of SOAS, he was Vice-Chancellor and Principal of the University of the Witwatersrand (Wits) in Johannesburg, South Africa since 2013. Under his leadership, Wits has done incredibly well – research output has increased, it has expanded its footprint in international journals and it has graduated more students than ever before. The university’s finances are stable and it has strong, independent governance structures in place. Habib’s commitment to excellence and transformation has left Wits in a far stronger position, and one of the best universities in Africa at which to study and conduct world-class research.

He joined the University of Johannesburg as the Deputy Vice-Chancellor for Research, Innovation, Advancement and Library in 2007, during which time he oversaw a doubling of research output, and the dramatic expansion in the training of a new generation of scholars.

He is one of the co-founders of the African Research Universities Alliance, an affiliation of research-intensive universities on the continent.

Habib has published numerous edited books, book chapters and journal articles over the last three decades in the thematic areas of democratisation and its consolidation in South Africa, contemporary social movements, philanthropy, inequality, giving and its impact on poverty alleviation and development, institutional reform, changing identities and their evolution in the post-apartheid era, and South Africa’s role in Africa and beyond. He is a well-known public figure in South Africa whose opinions are often sought by the media.

Guests: in order of appearance

HISTORY OF INDIANNESS | THE CASTE SYSTEM AND URDU (globalindianseries.com)

HISTORY OF INDIANNESS – VOYAGE THROUGH THE AGES – FINAL LEG (globalindianseries.com)

Are you a Global Indian that needs to go global?  You may be interested in our articles on citizenship by investment and global residency options, including Golden Visas. It’s a definitive guide for all global Indians to read on what you need to know and what you must avoid when looking to participate in investment migration and golden visa planning.