The Plight of the Roma in Europe-By Ambassador Grattan

The Plight of the Roma in Europe-By Ambassador Grattan 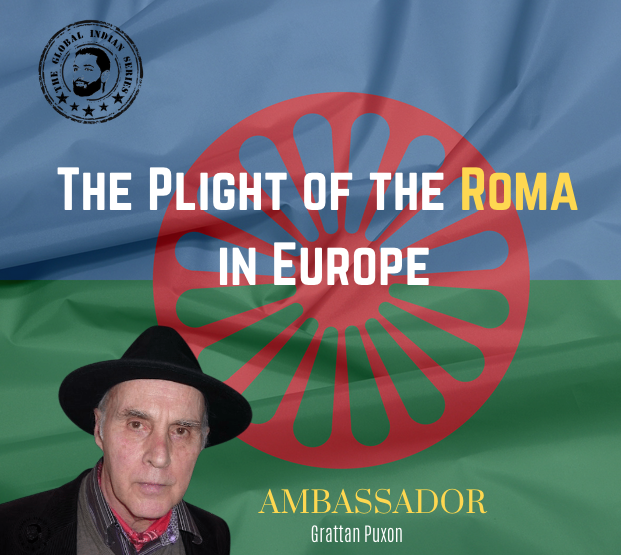 As one newly joined to your ranks, I take this opportunity to bring to your
attention – with a call to action – the gross racism and violence both verbal
and physical increasingly undergone by Roma in Europe – at a time, I must
add when the Romani people worldwide are seeking closer ties with their cousins
of the greater Indian Diaspora.

The verbal abuse can immediately be illustrated by the racist “joke” made by British
comedian Jimmy Carr who quipped in a recent show that “the deaths of thousands
of Gypsies” at the hands of the Nazis had been one of “the positives” of the Holocaust.

Let me tell you violent physical abuse on a huge scale took place when some 130,000 Roma faced ethnic-cleansed from Kosovo, resulting in 90% of the Romani populationbeing expelled at gun-point after a sojourn of 600 years.

This is an issues about to be raised by the Kosovo Roma Rights Coalition, assisted by two international American lawyers. Coalition members saw their
homes set on fire and looted by Albanian militia, relations murdered and raped, and disappeared.

Since these events in 1998-9 the breakaway Republic of Kosovo has sought recognition
from the rest of the world and now wants to be accepted into the European Union.

The KRRC is seeking to open negotiations with the Kosovo Government on behalf of Roma exiles. The aim is to obtain justice and compensation over the destruction of lives and homes.

India is among those countries which have declined to recognize the Republic of Kosovo – and
I am hopeful therefore that fellow Ambassadors will show solidarity with our efforts to obtain justice, justice over the wholesale attack on our communities which must rank as one of the most horrific since the Nazi genocide.