The Nationality & Borders Bill: Should Clause 9 be removed?

The Nationality & Borders Bill: Should Clause 9 be removed? 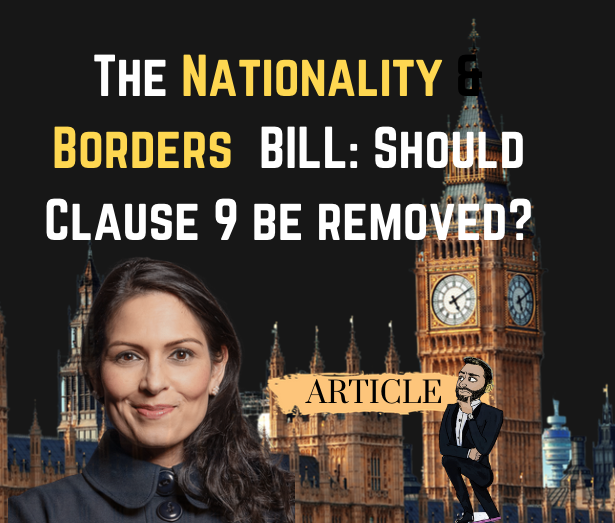 It is a mere matter of time before The Borders and Nationality Bill (https://bills.parliament.uk/bills/3023) becomes the law of the land and when it does, it will give the state unprecedented powers to remove citizens of their citizenship without informing them. There are real fears up and down the land that ethnic minorities (particularly those with brown or black skin) may be treated differently henceforth and that the Bill may be abused by those in power now and hereafter.

There is no telling whether these powers will be used responsibly by future Governments. There have been a number of miscarriages of justice already before the Bill becomes law. If it does (and all the indications are it will) a judge or the Home secretary will effectively be able to make a person stateless with the stroke of a pen.

While elements of the bill are not without merit, one clause has been causing particular concern, especially amongst British South Asians. I allude, of course, to the much-debated Clause 9. Hundreds and thousands of people have signed a petition to remove it forthwith. There have been several ‘Kill the Bill’ protests at Parliament.

In truth, the state has had the power to revoke one’s citizenship since 1the First World War. By the British Nationality and Status of Aliens Act of 1914, the state was able to strip the citizenship of British Germans whom it suspected of spying for Germany.

This power had been seldom used until 9/11. Thereafter, it has been invoked to remove the citizenship of 464 people.

Fahad Ansari is a lawyer who specialises in case where citizenship may be removed. If who have been deprived of their citizenship, excluded from the UK or who have had their passports confiscated on grounds that they pose a threat to national security, he’s your man. He also has not inconsiderable experience in judicially reviewing the decisions of the Home Office in the High Court, the Upper Tribunal of the Immigration Asylum Chamber and the Court of Appeal. He has successfully challenged decisions in matters of unlawful detention, removal, delays, naturalisation, failure to apply policies, fresh claims, fee waver applications and entry clearance refusals.

Perhaps his most famous case was that of a British Bangladeshi man whose citizenship the Home Office removed, thus making him stateless. Until January 2022, he had had been stranded in Bangladesh and his case is a salutary reminder of the dangers inherent in the Nationality and Borders Bill.

E3, as the man is referred to by the court, returns to the UK this week after being stranded in Bangladesh since 2017 when the Home Office served a deprivation of citizenship order on him shortly after he flew to the country for the birth of his second daughter.

According to the Home Office’s deprivation order, the Briton was “an Islamist extremist who had previously sought to travel abroad to participate in terrorism-related activity” and that he posed a threat to national security. E3 has never been charged with any criminal offence in the UK or elsewhere.

Although he is happy that justice has been done, he has effectively lost 5 years of his life. The Home Secretary’s unlawful decision was devastating: bereft of the main breadwinner, his family were rendered destitute.

Not unreasonably, E3 feels his very identity was under attack: “Being British is a fundamental part of my identity, but it really feels like you need more than just being born and raised in the UK to really be considered one. Having an ethnic background relegates you to being a second-class citizen.”

Then came the terrible news that, despite having his citizenship reinstated and his name cleared, the Government do not regard his third daughter who was born in 2019 as British. Ansari has vowed to strain every nerve to right this wrong: “We will continue fighting for his baby daughter to be recognised as a British citizen as is her legal right so that she can join him in the UK.”

At present the Nationality and borders Bill is going through the lords and it is widely believed that it will be passed. If so, the Bill will strengthen the hand of the state to summarily deprive someone of citizenship without the need to inform him or her. Two big questions remain: First, will  the Bill will discriminate against ethnic minorities?  Will the Bill may be abused by those in power now and hereafter?