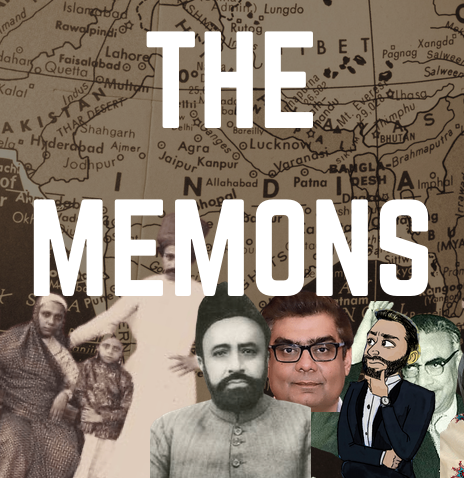 Long and proud is the history of the Memons. Traditionally, Memons have made highly successful merchant tradesmen. They have long had a well-deserved reputation for alms-giving and philanthropy.

But who are they?

Tracing their roots to Sindh, Kutch and Kathiawar, the Memons are an ethnic group whose origins are much debated.

According to one hypothesis, they were originally Jats of the Lohana ethnic group who converted to Islam in the 15th Century, after which they migrated to Bhuj at the invitation of its King, Jarejho Roa Khanghar.

It was at this juncture that one group of Memons migrated from Sindh to Kutch in Gujarat. They would henceforth be known as the Kutchi Memons

Another school of thought holds that they hail from That in Sindh in 1422 A.D when a certain Yusuffuddin Qadri ( whom memons consider a saint) converted seven hundred Lohana families ( some 6178 people) to Sunni Islam, whereupon they were obliged to migrate. No less a figure than Hussain Kassim Dada took this view at the Chail at the first ever All India Memon Conference in Rajkot in the year 1931.

What’s in a name?

The name Memon is a derivative of the Arabic ‘Momin’ meaning faithful, a name bestowed upon them by Qadri. Thy speak Memoni, an Indo-European language which in turn has been divided into three sub-groups:

Memons historically associated with Kathiawar in West India speak Memoni. Its origins have been much debated. Suffice it to say, the working hypothesis it that it began as a dialect of Sindhi. It is definitely true to say that all three sub-groups have much in common with this language, plus borrowings from Hindi and latterly English.

Many Memons have subsequently settled in the port of Karachi in Pakistan after Partition in 1947. Today, there are significant populations in the UK, the USA, Canada and the Middle East.

‘The Sailor Businessmen of India.’

Because the Memons are Muslims, they were not shackled by the caste system. Traditionally, a Hindu would lose caste he crossed the sea. Not so for the Memons, some of whom were thus able to set up a network of joint stock companies which stretched from Central Africa to China. Small wonder they are known as ‘the sailor businessmen of India.’

In 1960, the Memons had a population of 150,000 living in Pakistan and an equal number in India where they had set up All India Memon Foundation in 1984. They have associations in Pakistan, Mauritius and Tanzania and according to the United Memon Jamaat of Pakistan, their current population in Pakistan and India stands at 700 000 and some 900 000 respectively. Elsewhere, they number some 200 000.

But what they lack in numbers, they make up for in success. Many memons have amassed vast fortunes, much of which they donate to charitable causes.
Wherever they go, the Memons generally strive to do good. Not only do they support the less fortunate by means of monthly allowances but also have founded hospitals, orphanages, schools and colleges, all of which are open to all without distinction of caste, colour or creed.
A Fight for Identity

Like most minorities, the Memons have had to fight hard to protect their identity. This remains the case today both in India and Pakistan and further afield. They prospered under British rule, so much so that many distinguished Memons merchants and politicians were knighted such as Sir Abdullah Haroon, Sir Dawood Adamjee and Sir Sultan Chinoy.

One of the most storied houses off Memons is the Dada Commercial House. Long before partition, the Dada fgamily founded businesses in India, Burma, South Africa and the Levant.

The Memons lso founded a great number of industrial enterprise in Pakistan including the Asbestos Cement plant in Karachi, Hyderabad and Chittgong, three textile companies, Oil Mills, not to mention numerous cotton and chemical plants.

One important name is that of Sir Abdullah Haroon (1872-1942) A Kutchi Memon of great ability, he became known as the ‘Sugar King ‘and his residence Seafield in Karachi became the centre of Pakistan Movement in Sindh. Becoming a member of the newly formed Indian National Congress in 1917, he became a tireless campaigner for Independence. In the same year, he joined the All-India mMuslim League and added his voice to theirs for the creation of a separate Muslim state, something he would not live to see

At the time of his death in 1942, Sir Abdullah Haroon was one of the richest men on the Sub-Continent. He was a philanthropist and made major contributions to many charities. Sindh Provincial Muslim League was entirely dependent upon his contributions. He founded the ‘Islamiya Orphanage for Boys’, which incorporated a school in 1923 and made endowments for its maintenance and established the ‘Cutchi Memon Madrasa-e-Binat for Girls’ in memory of his great mother. He built ‘Muslim Gymkhana’ and playground at personal expense in Karachi and also built numerous mosques at various places in Karachi and Sindh. He contributed immensely toward the improvement of the Muslim lot in economic, educational, social and political fields.

We mention Haroon because he serves as a good example of the enormous contribution Memons have made and to continue to make to public life.

Fast forward to the present day and examples of distinguished Memons abound. Take Dr. Abdul Ghaffar Billoo, for example. A renowned paediatrician currently associated with Agha Khan University Hospital, Karachi, he is the founder Member and Chairman of the Health and Nutrition Development Society (HANDS), one of the most active NGO.

So, there you have it: The Memons, successful, kind hearted and resourceful.

Hon mentions: a massive thank you to our Global Indian Ambassador https://globalindianseries.com/ambassadors/haroon-ahmed-sacranie-global-indian-ambassador/ Haroon Sacranie for providing us a comprehensive education on the subject.