The Haunted line – Halloween in Fiji with Aaisha Khan

The Haunted line – Halloween in Fiji with Aaisha Khan 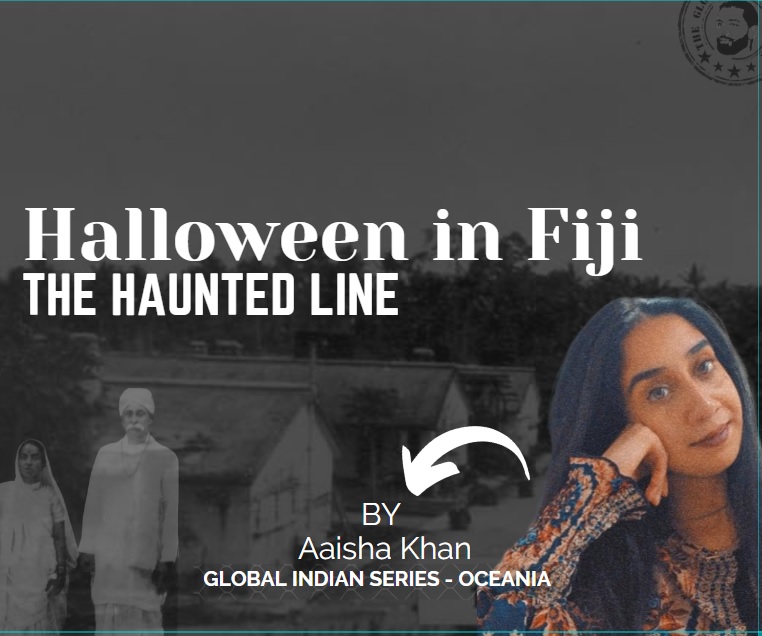 Trick or treat. Candy. Costumes. Carving pumpkins. Ghost stories. Horror stories. Frantic consumerism to keep up with the demands of children. Nightclubs packed with people dressed up in their favourite Halloween costumes.

Halloween has its roots in the ancient Celtic festival of Samhain. A pagan religious celebration which welcomes the harvest at the end of summer, people light bonfires and wear costumes to ward off ghosts. November 1st was designated to be All Saints Day by Pope Gregory in the eighth century as a day to honour saints. The evening before All Saints Day was known as All Hallows Eve – later known as Halloween. The stories of Frankenstein and Dracula are often told this time of the year.

Halloween is considered a modern festival in Fiji though the country has horror stories of another kind.

They say that indenture has haunted Fiji and the experiences shared by those who lived through it continue to linger in our ethos. The indenture system was one of contract labour, individuals were mostly recruited through deceptive means to serve as migrant workers in British colonies usually for five-year periods. A significant number of indentured labourers never returned to their home countries despite contracts stating a provision for return journeys after a decade of plantation labour.

In his book, ‘My Twenty – One Years in the Fiji Islands,’ Totaram Sanadhya has a chapter called ‘The Haunted Line,’ in which he shares the story of indentured labourers living in the lines of accommodation for indentured labourers where previously indigenous Fijians had been forced to live and die: ‘I strolled around and saw the haunted lines from all sides. There were twenty-four rooms in it, and on all four sides was tall grass. A little distance from the line in one direction was a very large sugar mill, and our ears would go numb from the sound of its engines. At three chains distance a river flowed. A bad smell was coming from the direction of the line, because there were so many rats inside the rooms.’ Totaram had tried to commit suicide but was rescued by a group of indigenous Fijians. He says this story is a ‘battle between two ghosts’. Totaram stated that: ‘When the ghosts of the line come, I will face them. They are the ghosts of the line; I am the ghost of the company.. I know well how to fight with ghosts’

One of Totaram’s most well-known accounts is of Kunti. ‘In his account, Kunti is a woman of twenty, with a husband. In 1912, at Sabukere, two men, a sirdar and an overseer, having cut her off from others, tried to rape her, but she ‘freed her arm, ran and jumped into the nearby river’. On being rescued, she complained to no avail to the owner of the banana plantation. Not only was she not protected (or the perpetrators brought to justice), but worse, her husband was beaten, and she herself was subsequently threatened by an immigration officer.’

When Halloween comes around, we tend to share stories of booths (ghosts), jadoo tonna (black magic) and paranormal experiences. Perhaps, in a bid to keep up with modern festivities, we forget that our ancestors went through an incomprehensible experience – one that they did not get closure from. The collective stories and experiences of indenture have manifested as generational pain and it is up to us to decide on how to act upon the pain that flows through us. Maybe then we will stop being haunted.

Find out more about Halloween:

Find out more about Totaram Sanadhya and his experiences in Fiji:

Find out more about indenture in Fiji:

1st image: Totaram and his wife