Suppose They Gave a War and Nobody Came

Suppose They Gave a War and Nobody Came 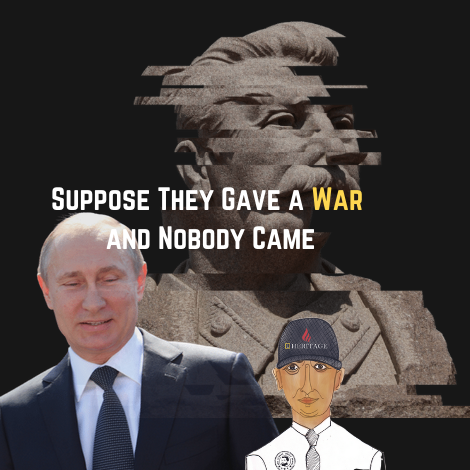 Vladimir Putin: A Russian Tyrant and a Demagogue who must be punished

I am inherently opposed to war between countries in any form.

Yet, every so often we get reminded of Wilfred Owen’s poem, The Futility of War”, like we are being reminded at this moment in history.

Being a closet polemologist, it was depressing to learn of man’s inhumanity to man as he pillaged, plundered and pulverized humanity over centuries, simply in the quest for power.

The world sits agog and aghast watching helplessly as Russian troops, under the orders of their despotic leader Vladimir Putin, prepare an onslaught onto a sovereign country, Ukraine, only so that Putin’s ideology of resurrecting the former Soviet Union is brought to fruition.

Has the world and humanity not suffered enough from the desires of madmen who seek pleasure in death and destruction?

From two major world wars to countless other battles between nations, with the unforgiveable toll in terms of human lives lost, we have eroded the common good of what decent human existence is all about.

The world cannot remain silent or still about what is currently happening in Ukraine.

Simple imprecation of Russia is no longer good enough or warranted.

Decisive and radical action in isolating and alienating Russia from the world’s mainstream economy and activity must begin immediately.

Putin must be sanctioned in the harshest possible way so that he is never allowed to perpertrate his evil upon a country who did not provoke a war.

If there was provocation on the part of Ukraine, then justifiable retaliation could be condoned.

There was no provocation whatsoever!

Any war brings with it collateral damage of innocent lives being lost – lives that were not party to such wars or those who declared such wars.

Is this just or fair or even remotely what we as human beings represent?

The frightening images of a military build up on Ukraine’s borders by Russian troops serves merely to remind us that as a caring humanity, we must never allow this impending atrocity to happen on our watch.

Ukraine declared itself an independent state on 24 August 1991 and declared that it would not follow the laws of the USSR (Union of the Soviet Socialist Republic).

It has functioned as such ever since.

Russia has no right to invade or terrorize innocent Ukrainians by the force of its military.

If even but a single life is lost in this incursion, then Putin and his cohorts must be charged with crimes against humanity and must pay the harshest price possible.

“Suppose they gave a war and nobody came” was the title of a 1966 essay by Charlotte Keys (a movie of the same name was also made), the mother of a son who was imprisoned for refusing to serve after being drafted and it is a disturbing but poignant reminder that the world is witnessing a bullying aggressor impose its military might upon a people who who do not deserve such an act against them.

The world’s cacophony against Russia must reverberate in decibels – condemnation must be unrelenting and action must be swift and telling.

This realm of ridiculousness must be stopped and we must never allow innocent lives to be lost – not for the sake of Putin or any other powermonger the world over.

William Wordsworth was so right – “The World is Too Much With Us”!