Priti Patel stops ‘Golden Visa’ with Immediate Effect: why you should be worried

Priti Patel stops ‘Golden Visa’ with Immediate Effect: why you should be worried 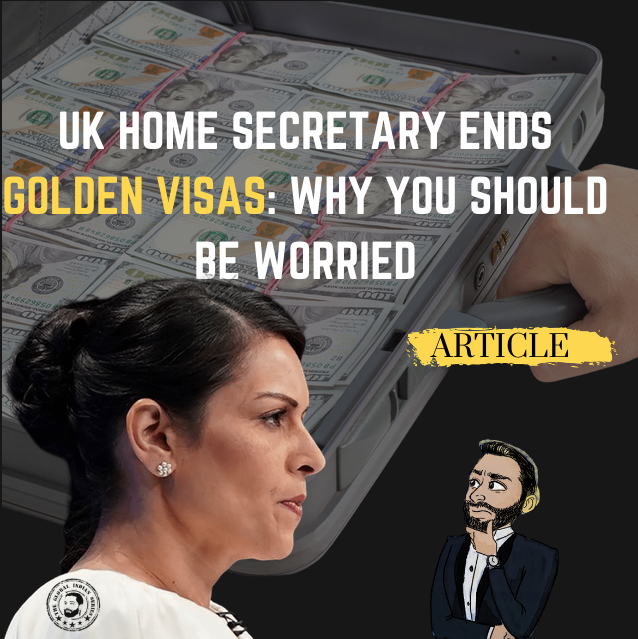 Sanctions against Russia in all but name

The consensus is that she did so to bring pressure to bear on Russian oligarchs who have sought British citizenship for the princely sum of £2 million pounds and to a a clear send a message to the Kremlin should it declare war on Ukraine. Citing ‘security concerns’ for the suspension, she declared that the Tier 1 scheme would be closed to new applicants from all countries.

There are real fears that the scheme has been and is being abused by the organised crime and the ultra-Rich. The Home Office’s finding will be published shortly and all the indications are it will paint a troubling picture of crime, corruption and money laundering.

London is awash with ‘dirty’ money much of it Russian. Hence Ms. Patel’s comment that: ‘I have zero tolerance for abuse of our immigration system. Under my New Plan for Immigration, I want to ensure the British people have confidence in the system, including stopping corrupt elites who threaten our national security and push dirty money around our cities.’ To all intents and purposes, the move is a de facto sanction against Russia.

The affair serves to underline the dangers inherent in Citizenship by Investment schemes and is a wake-up call to other countries around the world, some of which may have turned a blind eye to fraud and money laundering in the past.

Moscow has hit back. Sergei Lavrov  warned Moscow would ‘retaliate.’ Quite what this will be remains to be seen. What is abundantly clear that corruption can hurt a country’s reputation and that of those who obtain citizenship by investment. This means you.

If therefore you are toying with the idea of Citizenship by Investment (and many people of Indian origin are) then you will have to look elsewhere than the Britain.

A multi-million pound industry has arisen serving those who seek citizenship. Henley Global, Astons, Citizenship Invest, Sable International, Golden Visa Consultancy, Arton Capital-their name is legion. They will tell you, like Gottfried Leibniz (1646-1716) that it ‘the best of all possible worlds’ and that all is well in the world of Citizenship by Investment and residency by Investment. This is utter nonsense. The very idea of commodifying citizenship is problematic and, dare one say it, inherently venal.

That is not to say it is illegitimate. We are merely saying the very idea of effectively selling passport ports encourages corruption and attracts the wrong sort.

That’s why law-abiding citizens need to think long and hard about making a decision as to where to invest their money. The EU has grave concerns about their viability and has urged certain member states such as Bulgaria and Hungary to get rid of theirs. I‪f misused or abused, these schemes could carry risks of economic crime and‬
corruption deriving from a lack due diligence.‬
‬
It is highly unlikely that the Caribbean islands will discontinue their schemes, noblest ‬because they provide a much-needed injection of cash. The clock may be ticking, however, in Europe.