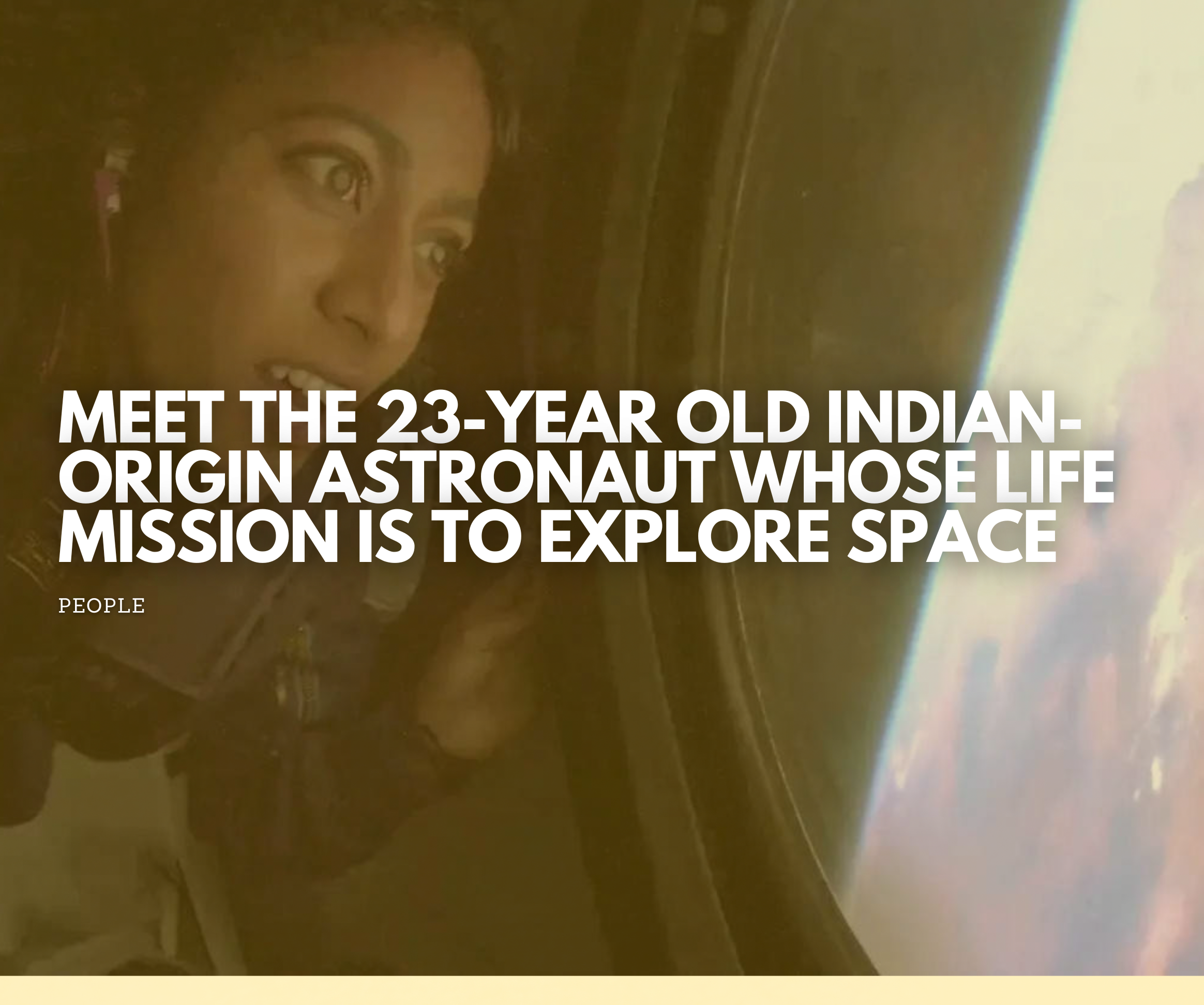 Meet The 23-Year-Old Indian-Origin Astronaut Whose Life Mission Is to explore space — Sirisha Bandla worked hard at her dream of going into space despite having it shattered once. The young Indian-origin astronaut talks about her incredible experience in space – and about doing a somersault!

The earliest memory that Sirisha Bandla, Vice President of Government Affairs and Research Operations at Virgin Galactic, has of experiencing the night sky is sleeping on the roof at her grandparents’ home in Chairala, Andhra Pradesh, seeing the stars shine bright since the air was devoid of any pollution. Although she can’t pinpoint the exact moment in life when she decided to become an astronaut, she knows it all began there on that terrace. “I think that’s really what sparked my curiosity; it made me want to know what’s out there and how it feels to rub shoulders with the stars,” she remembers. Over the years, it naturally progressed into her wanting to be an astronaut, “because, you know, those are the people going up into space!”

As part of the process, because, admittedly, she was “crazy” as a child, Sirisha made a plan. It was to start looking at other people who had done it, which led her to read up on the Apollo astronauts and look at how they had gone into space, all the while thinking about how she could model her career after them. By this time, she had moved to the United States with her parents. “But it wasn’t until I discovered Dr Kalpana Chawla when it really became something attainable,” she admits. “There is a saying that you can’t be what you can’t see. And seeing someone who looked like me doing what I wanted to do, even though it was completely mental, diminished some sort of barrier in my mind.” It was at that point that her dream turned into a goal. Because Kalpana was an incredible engineer, Sirisha was driven to pursue aeronautical engineering as well at Purdue University in the US. The best part? She ended up liking it!

“There is a saying that you can’t be what you can’t see. And seeing someone who looked like me (Dr Kalpana Chawla) doing what I wanted to do, diminished some sort of barrier in my mind.”

Sirisha started out wanting to be a NASA astronaut, but her eyesight did not permit that. “I got my first glasses when I was in third grade,” she tells us. “And, then, later, at about 15 or 16, my eyesight got to the point where I didn’t qualify to be a NASA astronaut. And I knew instantly because I had memorised the qualifications. My dream was shattered.”

Shortly thereafter, however, Virgin Galactic was formed and became the first private space flight company. When business magnate Sir Richard Branson announced he was going to create Virgin Galactic to offer access to space for everyone, Sirisha knew her dream was back on, and she had to keep at it.

Then, life happened in the form of a call from one of her professors at Purdue, who knew of her interest in going into space. He nudged her into taking up a policy job in the field in Washington, DC, to get to know the commercial space industry and the players within it. In that position, she met multiple people from Virgin Galactic, and one thing led to another. She was hired, and went on to become a part of the first fully crewed spaceflight, Unity 22, to fulfill a number of test objectives.

“It was absolutely breathtaking to see Earth from space. I had grown up looking at pictures; they just don’t do it justice.”

Although she was in work mode for the 90-minute flight, Sirisha didn’t “think there was any part of it that was not great, to be honest.” The first thing she did was a somersault; it was a part of her task! It was only after a little over two minutes into the flight that she managed to get to a window to look out, and she wishes she could think of a better word than ‘incredible’ to describe what she saw and felt. “It was absolutely breathtaking to see Earth from space,” she enthuses. “I had grown up looking at pictures; they just don’t do it justice. Earth looks even brighter from space than I had imagined. You can see very clearly the thin blue line of the atmosphere that really puts into perspective how lucky we are to have the planet we do.” Since the seed of all this had been sown in India, she took the Indian flag up on her space suit.

One of the most wonderful aspects of seeing the world like that was seeing it sans borders. “It strikes you how divided we’ve become.” Of the experience, she says “You realise you feel small, but you don’t feel insignificant. So, once I was back on Earth, I was just so full of energy to explore the planet, to start some of those projects I’ve had on the back burner.”

Since that flight, Sirisha has taken every opportunity to be outdoors – going hiking with friends or taking long, aimless walks with her dog, whom, she mentions, she is obsessed with. And, while she is not working or being outdoors, she works with a few fellowships that have been created to increase interest in getting students into the commercial space industry, getting them internship and mentorship experiences.

“Be driven by your passions and find your path. Everyone’s path is different and unique. Some doors will close, but others will open. And you have to embrace that.”

She believes everyone has to put in the work to create the diversity we want to see. Which is why she was happily surprised to receive numerous messages from young girl students from India about how inspiring she is. “It was heartwarming to have young women say that seeing me reach my dreams was inspiring them to start towards theirs.” Sirisha wants to leave such young girls with two thoughts: “Be driven by your passions and find your path. Everyone’s path is different and unique. Some doors will close, but others will open. And you have to embrace that.”