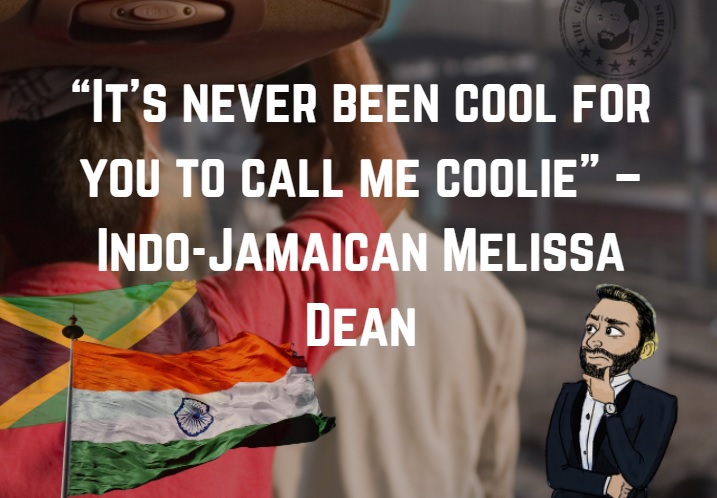 Melissa Dean is an Indo-Jamaican Masters student at Queens University in Canada. Her cultural background as well as her passion for advocacy and equity issues drives her to express her interests through spoken-word poetry. “I am Indo-Jamaican” is the first public performance of her poetry. Her great grandmother was born on a ship carrying indentured servants headed to Jamaica where her family would stay for four generations before emigrating to Canada.

Dean’s “I am Indo-Jamaican” has sparked conversation among its Jamaican and Indo-Caribbean viewers on various social media forums, reaching a total of over 100k viewers. The poem highlights the ancestral history of Indo-Caribbeans and brings to light some of the taboo topics of Indo-Caribbean existence, including social acceptance, race and the derogatory term “coolie”.

Dean delves into issues of social cohesion and acceptance in the poem’s first few lines, where she describes the feeling of being “not brown enough to be Indian” or “black enough to be Jamaican”.

During indentureship, Indian workers were brought to the Caribbean and dispersed among the islands to work on plantations. While many intended to return to India, this was made difficult when the time came due to political and economic reasons. Today, many Indo-Jamaicans tend not to be accepted by those in their former home country (India) due to perceived loss of Indian culture and As Jamaica (and most of the Caribbean) is primarily composed of Afro-Caribbeans, it is also often difficult for Indo-Caribbeans to be accepted as ‘truly’ Caribbean by those in Western countries, as many are unaware of their history.

Jamaica’s motto, “Out of Many, One People” promises equity, unity and diversity. Dean reinforces the importance of the motto by reaffirming her place as an Indo-Jamaican individual and highlighting the existence of this identity.