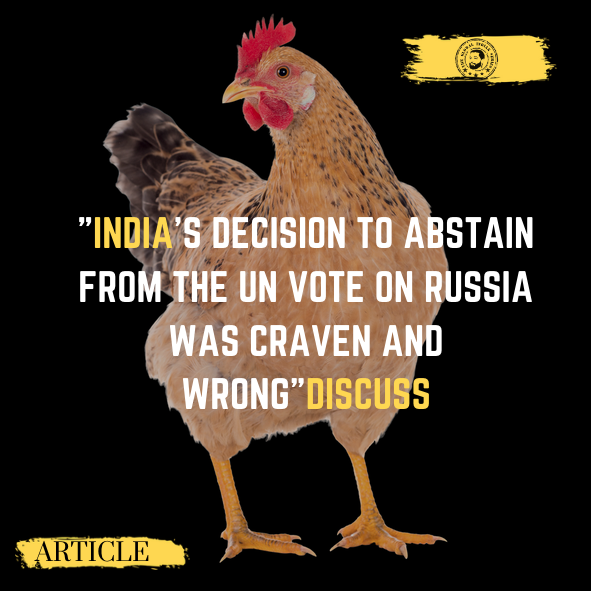 Today, with your leave, we are going to try something a bit different on The Global Indian Series: a debate. Our motion is as follows: ‘This House believes that India’s decision to abstain from U.N. vote against Russia was craven”

In the interests of fairness, we shall put forward both sides of the argument, after which you, dear reader, can decide where the truth lies.

The first point to make in in India’s defence is this: abstention does not mean it condones Putin’s War. On the contrary. Prime Minister Narendra Modi in his telephone conversation with Putin last Thursday appealed for an “immediate cessation of violence.” Modi urged him to return to diplomacy, saying the “differences between Russia and the NATO group can only be resolved through honest and sincere dialogue.”

India’s finds itself in a delicate position. On the one hand, it needs to keep the US and the West sweet. On the other, it is very loath to antagonise Russia with whom it has long had close diplomatic ties. It needs both in order to check the growing power of China in the region.
India’s first duty is protect her own interests and those of her people. To blame a country for treading carefully so as not to jeopardise the balance of power is naive.

Historically, India depended on Soviet support and its veto power in the Security Council in its dispute over Kashmir with sworn enemy Pakistan and this remains the case today. So much is at stake for India.

It is not just a question of geopolitics, it is about money too.  According to the motion, This house believes that India’s decision to abstain from U.N. vote against Russia was craven.” We beg to differ. . India and Russia have set a target of $30 billion in bilateral trade by the end of 2025. India depends upon Russian oil and gas. Had India used its vote to rebuke Russia, relations would undoubtedly have soured and this in turn might have jeopardised the trade deal and therefore cost India thousands of much-needed jobs. It is highly likely, too, that Russia would have retaliated by raising oil and gas prices.

Further complicating matter is that India locked in a 2, 100 mile border dispute with China in the Himalayan region. India hopes that Russia can bring its influence to bear and persuade China to cede Aksai Chin and land south of the McMahon line to India. The border can shift owing to the presence of rivers, lakes and snowcaps. Relations worsened after a clash with Chinese troops at Ladakh in 2021 in which at least twenty Indian soldiers were killed.

Both nuclear powers (which have two of the world’s largest armies) are racing to build roads and infrastructure on the disputed border, which has only served to make matters worse.

Talks in the last three decades have failed and the 1962 Sino-Indian war (when India was soundly beaten) still is a source of gall and wormwood to Indians.

The situation is a tinderbox. All it would take is one match to light it.

Small wonder has had to put realpolitik before emotion. In doing so, India is not siding with Russia, but India is playing a long game. Few countries envy the stakes and intricacies of India’s foreign policy and one needs the wisdom of Solomon to curb Chinese power without upsetting Russia and the West.

India is quite rightly proud to be the world’s biggest democracy and as such it should set an example to the world. Abstaining from the vote in the UN was a sin of omission. Had India had the moral courage to take a stand against Putin, doing so would have sent a message to the Kremlin:

“Mr. Putin, Realpolitik does not trump morality. We might need your alliance to counter Chinese power, we might buy your arms, you might need your oil and your gas and we might need your support over Kashmir, but, you sir, are a war-monger and a bully. To invade a sovereign state for no good reason apart from the fact that you covet it was the act of a Stalin or a Hitler. We’ve keep the receipt for S-400 missile system, and although it gives us a much-needed deterrent against China and Pakistan, we want our money back.”

Besides, the deal puts us at risk of U.S. sanctions asked its allies to stay away from Russian military equipment.

But realpolitik and self-interest triumphed, did they not? Shame on you.

Now, it’s over to you. Where do you stand on the matter?