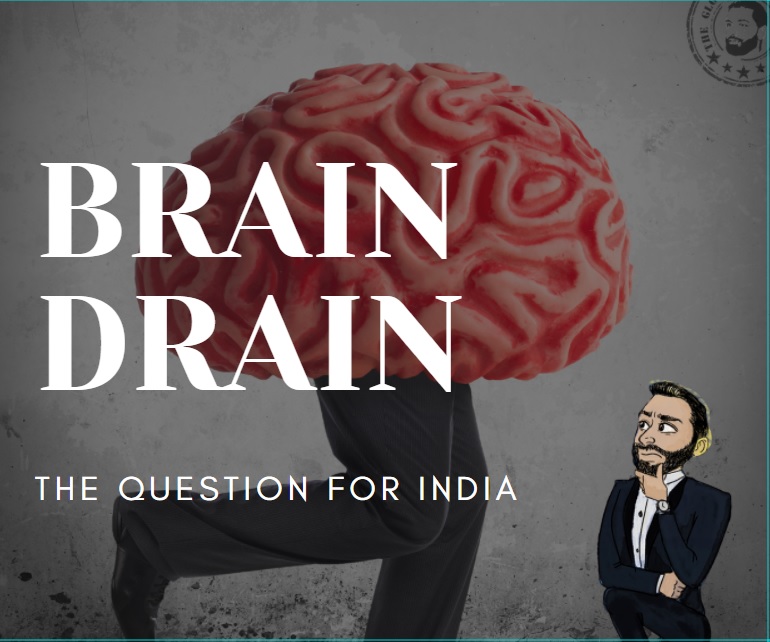 India has a big problem: a brain drain of epic proportions.

The Global Indian Series can reveal that highly skilled Indians are leaving India in their droves in pursuit of better opportunities elsewhere. Small wonder the Indian diaspora is the biggest in the world. According to 2021 figure, some 3.12 million highly educated India have left, more than any other country on earth. To put it another way, 65 % of educated ex-pats are Indian.

The phenomenon is complex and one thing is abundantly clear: it’s not just about the money.

To employ two buzz words, there are ‘push’ factors and ‘pull; factors at play here.

That most Indian nationals can speak English has made the process even easier. This goes for Pakistanis and Bangladeshis, too.

Brain Drain leads to Brain Gain and there’s no denying that the West has greatly benefited from the influx of skilled people from around the world, particularly India and South Asia.

Does the Brain Drain help or Hurt Brand India?

Both. The Indian Government is keen to make political capital out of the successful Indians abroad. And why not? Their name is legion. From the CEOs of Blue chip countries, to It specialists, from bankers to doctors, Indians are high-achievers. Many Indians are quite rightly proud of the achievements of their brothers and sisters.

But most of those who leave never return.

But when politicians try and piggyback on the success of others to further their ends, it ill becomes them. The vicarious triumphalism of making political capital out of the loss of human capital feels hollow and opportunistic.

That so many people want to leave India is not a great advert for India PLC. The rich are leaving, too. Since, 2014, 23, 000 million millionaires have left her shores, many using citizenship by investments schemes – selecting destinations such as Saint Lucia.

These are tiny figures for the second most populous country in the world. However, it is definitely an area of concern for the Government. India is losing its doctors and nurses in huge numbers

Mr. Modi, the Prime Minister of India, has introduced a number of measures to stop the haemorrhaging of talent. Chief among them is The National Education Policy (NEP) whereby (among other wide-ranging reforms) the best university from the world (including Oxford and Cambridge) will be allowed to set up campuses on Indian social. This he hopes will serve to reduce the numbers of students leaving Indian to go to university abroad. He wants India to be a ‘Knowledge economy’ with an education system which “prepares according to the needs of the future on both [sic] knowledge and skills front.” This in turn will contribute to India’s becoming the world’s third superpower.

Modi’s government has been very vocal in trumpeting the achievement of Indians living abroad. While his praise is no doubt sincerely, one feels that it is all part of improving India’s standing on the world stage. This is nothing inherently wrong with this. On the contrary, it is part of his job. The question is: to what extent is the Indian Government piggy-backing on the success of others for its own ends?

‘Indianess’ is nebulous and hard to pin down. After all, it is well nigh impossible to define what Englishness is for the English, a tiny country in comparison to India. Identity, be it racial, cultural or persona, is a will of the wisp, pursued but never caught. It is a bit a bit like Jazz: if you have to ask what it is, you’ll never understand it.

India is not alone. In the last two years alone, some 884,000 young Pakistanis have left the country, according to the official registrations at the bureau of emigration. The record indicates more than 300,000 Pakistanis left the country in 2018.

Apart from people’s personal reasons for upping sticks, there is an elephant in the room: the great disparity between wages between the West and growing Emerging Developing Countries (EDC’s) such as India and to a lesser extent Pakistan. This has been partly fuelled by globalism and ever-greater consumption in Europe and the USA. To put it crudely, we need China and India to make the stuff we want but do not necessarily need in the West. Of course, as India et al. grows richer and as its middle grows acquires greater spending power, the gap between West and West will shorten and this doubtless will cause problems.

So how does one square the circle between cheap labour on which our consumerist society rests and a more affluent society in emerging economies?

Companies keen to expand in Europe and The US faces a huge amount of competition. That’s why getting the marketing and branding right is imperative. The big question any company worth its salt has to answer is this: how can we stand out from the crowd in a crowded buyers’ market?

One thing that strikes me about the Indian Government and Indian Officialdom is that there is a language of emigration. NRI,’s PIO’s, Non-returning Indians (NRI’s). The list goes on and on

While it may speak to a certain love of acronyms and bureaucracy, India and those of Indian origin do seem to attach huge importance to identity.

I wonder why that that is so. Is it because the vast size of the Indian diaspora? Might partition be at the bottom of it?

For my part, I regard myself as a Global Indian and I don’t need a passport to tell me that or a border on a map, I know in my heart that it is so. And I am also British. Kipling was right:

Oh, East is East, and West is West, and never the twain shall meet,
Till Earth and Sky stand presently at God’s great Judgment Seat;
But there is neither East nor West, Border, nor Breed, nor Birth,
When two strong men stand face to face, though they come from the ends of the earth!