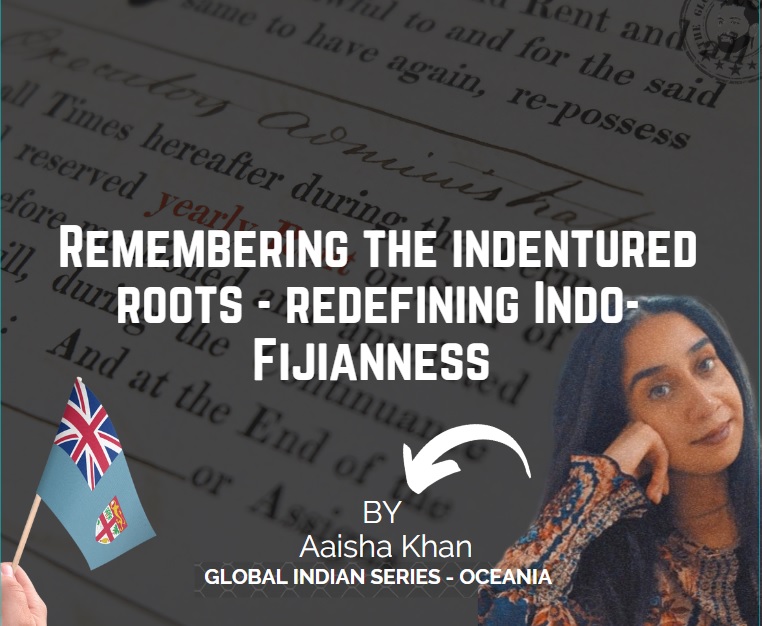 Over 60, 000 Indian indentured labourers came to Fiji – the adults on a five-year contract, after which they could return to India at their own expense or on a free passage after 10 years’ ‘industrial residence’ in the colony. (Lal, 2019).  As indentured emigration was state sponsored, the Government of India was kept informed about the condition of its subjects in the colony, but in the late 19th century, that interest was largely passive and pro forma. Irregularities in the indenture system began to surface and their exposure brought some amelioration. When reported sexual abuse of women reached the Indian public and threatened massive civil protest, the Government of India intervened and ignoring pleas from Fiji, abolished the indenture system. The last indentures were cancelled on 1 January 1920. (Lal, 2019).

It was difficult for indentured labourers to keep up ties with their families in India as many were illiterate. Also, many believed that it would be shameful to return to India as they had crossed the ‘Kala Paani,’ (black waters) resulting in a loss of caste. Hence, they would not be welcomed by their families in India. Despite this, around forty percent of Indian indentured labourers did return to India and were met with varied responses and difficulties. Most stayed in Fiji – by the time the contractual five years were up, many marriages had taken place and children had been born. The shackles of caste being broken meant there was an opportunity to live life more ‘freely’ and economic and social factors were also at play though the community was hardly a tight knit community. What emerged was a collection of poor, illiterate individuals, plagued by social evils, in great need of leaders, distrustful of the government and subservient to the Europeans. (Gillion, 1958). Education, political rights, land acquisition and acceptance were just a few of the problems in store for the community.

At the time of Fiji’s independence in 1970, the Indo Fijian population had surpassed the indigenous population. Indo‑Fijians had been portrayed as an “immigrant race” who were alleged by the Europeans to be “threatening Indigenous paramountcy,” with Europeans portraying themselves as protectors of indigenous rights against the Indians. Norton (1990).

Until 2010, Indians remained ‘Indians’ and indigenous Fijians were ‘Fijian’. After 2010, all citizens became ‘Fijians’ and the indigenous became knowns as iTaukei. The national constitution mandated that only iTaukei could own Native land. On terms ranging from 10 – 99 years, Indo Fijians leased Native land, the land mostly being used to grow sugar cane. This created a ‘tenant – landowner’ divide with parallel ethnic division with ramifications for rent extraction and ethnically divisive politics. (Chand, 2014).

After 1917, CSR systematically divided their plantations to lease to Indians. These leases came with conditions about the treatment of the land and supervision of sugarcane growing. After indenture, the Indian population numbered 60, 634, out of which 26, 810 had been born in Fiji. Many were settled in Suva and the sugar growing areas though there were varied levels of wealth in the Indian community.

After indenture ended, possibly the most important ties of kinship for indentured labourers (except for those who came with family), were the jahajis – shipmates. The strength of this bond continued over the years. Girmityas would gather in the evening at a common place to smoke hookah and to reminisce about their lives in India and early days in Fiji.

A generation of Indians born in Fiji had grown up without any formal education. The task of educating them had been left to the Christian Missions. Indians were eager to be educated; some learnt how to read and write from Fijians even though they were excluded from Fijian schools. In the final years of indenture, Indians had established twelve small schools and by this time the Government had begun considering the importance of Indian education. The 1909 Education Commission recommended that primary schools should be provided for Indians under Government control or with Government grants, they also recommended that there should be multi racial schools, though this was not adopted. The main purpose that Indians served in Fiji at that point in time was an unskilled labour force and it was thought that education would induce them to develop new aspirations. The CSR agreed to contribute money to the Methodist Mission for the purpose of education of Indians. Indians saw education as the key to social and economic advancement and the Missions were the only ones able to meet the demand.

Freedom was not fully achieved, for the immigrants had lost one country and not yet found another. That was a task for another generation. (Gillion, 1958). The (political) marginalization of Indo Fijians has been evident in the 1987 and 2000 coups which triggered a huge migration of Indo Fijians to mostly Western countries. Indo Fijians have faced very real and painful struggles of being accepted in Fiji, we have been seen as vulagi (visitors) in a country that our ancestors gave their lives to. While our ancestors toiled on the fields and tried to make a home for themselves on a new soil, many of us are left wondering which exact soil we belong to.

Read more about the ‘memories of indenture’:

Read about the Socio‑Political Consequences of Forced Migration:

Read: ‘A History of Indian Immigration and Settlement in Fiji’ by K. L. Gillion: