HAPPINESS AND MY LIFE | KELLY DORJI | MADE IN BHUTAN

HAPPINESS AND MY LIFE | KELLY DORJI | MADE IN BHUTAN 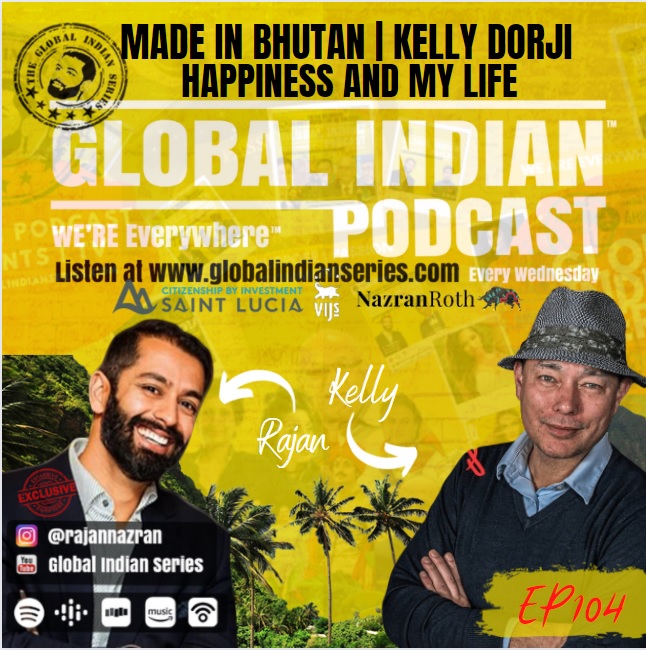 Bhutan is a country that measures national happiness as a way of human custodianship, but how does that upbringing impact the way you see life and interact with the existential ideas whilst forging your own career? In today’s show we meet with Kelly Doriji, a familiar face in Bollywood, South Indian Cinema and the modelling world, to take on an inspired discussion that looks at the foundation of thought of Bhutan and how it helped inspire his own voyage into the Arts.

Dorji’s father is Lynpo Paljor Dorji, widely known as Dasho Benji, the permanent advisor to Bhutan’s National Environment Commission. His mother is Louise Dorji, an author of children’s books and a founding member of Bhutan Broadcasting Service (BBS). Dorji attended St. Paul’s School in Darjeeling and Sherubtse College in eastern Bhutan. He earned an honors degree in History at St. Xavier’s College in Mumbai. Dorji’s grandfather was Bhutanese Prime Minister Jigme Palden Dorji. Dorji is a member of the Dorji Family of Bhutan and descendant of the Sikkim Royal Family.[1][2]

Kelly Dorji rose to prominence as a fashion model in the late-1990s and early 2000s in India. He worked as a runway model in India for designers such as Shahab Durazi, JJ Valaya, Arun Khanna, Rohit Bal, and Tarun Tahiliani and as a print model in London for Models Out of Town. Dorji hosted English television show ‘Star Biz’ for Star TV with co-anchor Lisa Ray.

Kelly Dorji has acted in almost 30 films over the course of his career. He made his acting debut in 2005 as the main antagonist opposite Ajay Devgan and Bobby Deol in Mani Shankar’s Tango Charlie. In 2008, Dorji moved to the Telugu film industry where he gained recognition for films such as the 2007 action hit Don opposite Nagarjuna and Ek Ka Dum opposite Mahesh Babu. Dorji has also been influential in boosting the popularity of Bhutanese films in his own country with the release of his Dzongkha film Sem Gawai Tasha in 2011.[6]

Dorji is well known for his own film stunts, much of which were self-choreographed. He also designed sequences for pageants, and assisted choreographer Lubna Adam. After a near death accident in 2013, Dorji limits his stunt work in films but continues to act.

Kelly Dorji is a painter and photographer. He has studied painting with a number of artists including Elsie Evans, Sidharth, and Karma Wangdi. He studied photography with fashion photographer Chien-Wien Lee. Dorji exhibits his work at contemporary art gallery Gray Area in Thimphu, Bhutan.[10][11]

Dorji supports the Bhutanese contemporary art sector more broadly as an advisor on the board of the Voluntary Artist’s Studio of Thimphu (VAST). Dorji serves an executive board member for the Tarayana Foundation. An avid enduro motorcylist, Dorji rides for charity with the Tarayana Dragons.

Kelly Doriji since recording has become a Global Indian Ambassador to for the arts in Bhutan.

Guests: in order of appearance

HISTORY OF INDIANNESS – VOYAGE THROUGH THE AGES – FINAL LEG (globalindianseries.com)

Are you a Global Indian that wants to go global?  Visit our website to understand more about the leading countries to trust and ultimately the ones to avoid. From gritty discussions on citizenship by investment, through to how to find work abroad, top university guides and social issues for change. We are the official platform for People of Indian origin.