East Africa and the need for a new narrative- Uganda

Exploring the ties that bind –

For over ten years, I have travelled the globe piecing together the kaleidoscope that is the Global Indian community. This journey has seen me being taken hostage, face Ebola through to experiencing a range of natural disasters, and meeting some of the most remarkable people on this planet; from social activists, billionaires through to heads of state and everyone in between.

One of my greatest inspirations for this journey arose from the stories of Eastern Africa. I am a 2nd generation British Indian. My mother was born in the Philippines and father in India, and we grew up knowing about the community in South East Asia. But it was the community stories we heard from those who arrived as refugees from Uganda that captured everyone’s attention.  Whether you were an Indian in Suva, Delhi, London, NY, Toronto, through to Port of Spain, Uganda seemed like a turning point in our collective view on how we were perceived. Unfortunately, as we know, life has a funny way of merging fact and fiction. Ultimately, what transcribed was that the actions of a dictator such as Idi Amin became a blanket description on the whole of East Africa, with the then stories emerging from the diaspora experiences in Malawi and Kenya, which increasingly stoked fear.  Myths began to rise, that the region hated people like us.

When we fast forward to the present day, we see that the global Indian community has made incredible strides – we have found ourselves as captains in industry, heading up nations through to holding positions of commercial power, hotel owners, CEOs of multinationals through to political influence. I have been lucky to meet many of our communities personally worldwide, and they have followed our series progressive journey with interest.

Unfortunately, the stories and many of the region’s myths remain buried deep in the mindset of present-day entrepreneurs who grew up listening to these accounts. Despite the large presence of people of Indian origin in East Africa, there are many more who are uninitiated to the reality of life there and still have “rationalized” fear towards the region.  Just imagine what this means regarding the potential goodwill or even billions in FDI that has been lost on the back of an unfinished narrative?

I have been very fortunate to have visited and stayed in the region. I spent a considerable amount of time in Addis Ababa, Ethiopia where the Late H.E President Meles Zenawi, shared his own story with me and told me about his view on India and the diaspora.  I met with Late H.E Michael Sata of Zambia, who, along with his sharp humour, shared his experience of meeting the community whilst he lived in the UK and the importance of changing the narrative. In Malawi, I was fortunate to have met with H.E President Peter Mutharika while he was a Minister, in which I also learned about the significant community in the country. These stories started to help me see the region in a different light and, ultimately, my perspective of the regions and the stories that matter.

East Africa has changed. Uganda has moved on, but the global mindset has not in the speed needed. More needs to be done purposefully to help dispel the myth from the facts and in our series, we do just that. But for this to occur, Governments need to also recognise the power of open, honest conversations and that true economic development requires a deep trust from the international community. It requires more than policy changes, but a repositioning of the narratives that have shaped an entire generation’s imagination.

In today’s episode, Rajan travels to India to meet internationally renowned actor Kabir Bedi, whose career not only spans five decades but also three continents, three languages, three mediums and whose life has been as exciting as his reels! From Knight…

Marriage is often considered sacred and even quintessential within our culture.  The mere whisper of ‘separation’ or ‘divorce’ is often riddled with stigma, especially within the South Asian community.
In today’s episode, Rajan travels to South Africa …

We only realise the value of life when it’s taken away. But we often only appreciate it when we are faced with hard situations.
This week we have a conversation about death, something we often don’t do within our community, and the grieving process throu…

THE HUMAN FACE OF ENTREPRENEURSHIP WITH MANJIT MINHAS | MADE IN CANADA

In today’s episode, Rajan travels to Canada to meet Canadian Beer Baroness and Dragons Den personality, Manjit Minhas, owner of one of the largest breweries in North America.
Being a successful woman in business can often mean juggling a personal life, c… 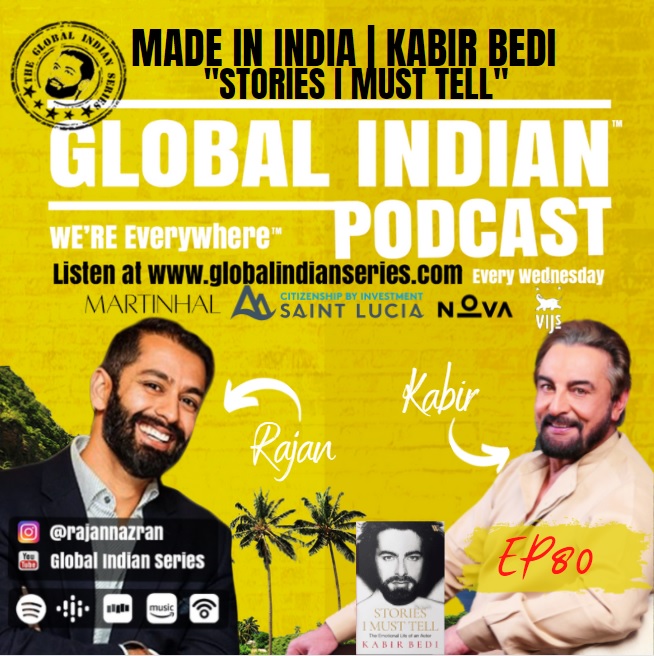 In today’s episode, Rajan travels to India to meet internationally renowned actor Kabir Bedi, whose career not only spans five decades but also three continents, three languages, three mediums and whose life has been as exciting as his reels! From Knight…