Citizenship by Investment-“Fools Rush in where Angels fear to Tread”

Citizenship by Investment-“Fools Rush in where Angels fear to Tread” 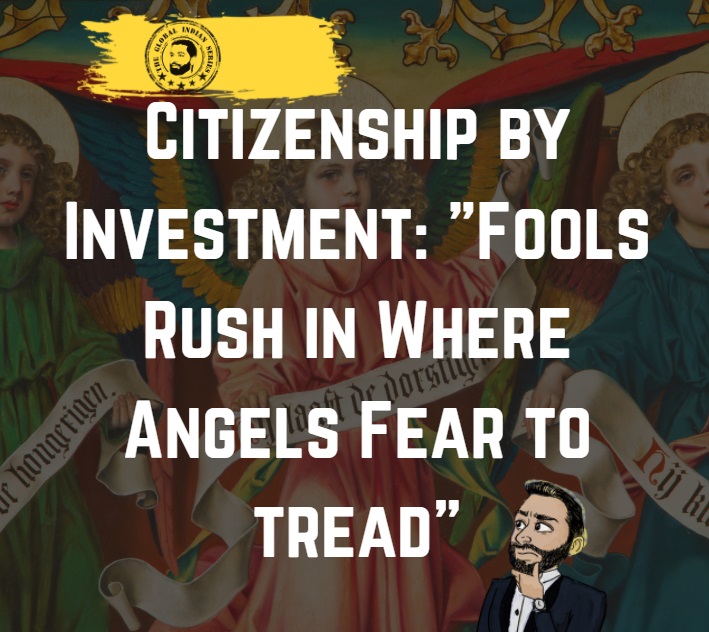 Alexander Pope had the right of it when he said:

“Nay, fly to Altars; there they’ll talk you dead;
For Fools rush in where Angels fear to tread.”

This applies as much to Citizenship by Investment as to anything else.

If you are a person of means and want to acquire citizenship or residency in another country, then you need to know that your investment is in safe hands. The fact of the matter is some schemes are better than others. Some have been mired in allegations of corruption-Malta, St. Lucia, Antigua and Barbuda to name but three. Such scandals are bad for the countries and they’re bad for you.

Why? Citizenship has become a hot commodity in recent years and like all commodities their value can go up as well as down. Bad headlines-whether it is backhanders, inadequate vetting procedures0 have all manner of knock-on affects, all of which may hurt your pockets and your reputation by association.
That why it behoves countries tout for migration investment’ to ensure that their scheme are unimpeachable. Failing to do is bad for one’s standing in the world and may mean that investors look elsewhere. To those who are thinking of making a substantial ‘donation’ so as to obtain citizenship and the perks that come with we have two words of advice: caveat emptor.

The OECD’s 2019 paper, ‘Corruption Risks Associated with Citizen- and Resident-by-Investment Schemes,’ does not pull its punches:

In addition to the numerous macroeconomic risks to economies from dodgy schemes, it adumbrates four ways in which a badly run scheme can affect the value of a particular scheme.

Lax RBI/CBI schemes in many countries have allowed crooks to
misuse the schemes for money laundering purposes.

There has been a lack of due diligence in the vetting procedures of a number of schemes. Or worse, some authorities have turned a blind eye to clear case of crime. Failing to adequately investigate the financial affairs of individuals and companies has been a recurring theme for the last thirty years or more.

In 2018 he United Kingdom suspended the much-vaunted Tier 1 (Investor) visa programme address money laundering, corruption and organised crime related risks. It transpired that the vast majority of the beneficiaries of the programme came from Russia, China and the United Arab Emirates with more than 1000 visas granted between September 2017 and 2018.

Portugal, whose Golden Visa scheme has become the envy of the world, launched an investigation in 2014 of alleged bribery and money laundering of Portuguese officials in relation to granting residency rights to non-EU citizens. However, the 2014 investigation was concluded
with the claim that the scheme is legally compliant. The FATF 2017 Mutual Evaluation Report of Portugal, however, states that the risks of corruption of the local RBI scheme remain particularly high.

The sometimes murky world of Citizenship by Investment is fraught with danger for potential investors. Therefore, it is well to know your facts and the potential risks.

The OECD investigated no fewer than 100 Citizenship by Investment scheme and discovered that many schemes are open to abuse.

High-risk schemes include those are those which:

1. Impose no or limited requirements to be physically present in the jurisdiction.
in question (St. Lucia, St. Kitts and Antigua and Barbuda fall into this category)
2. Offer either low/no tax jurisdictions and/or exempt
foreign source income
3. Offer special tax regimes for foreign
individuals.

Corruption
If a country’s vetting procedure is not fit for purpose, this can lead to corruption. If criminals can hide ill-gotten gains in your country, the truth will eventually out. This will damage a country’s reputation and deter potential investors.

The Hungarian Investment Immigration Program, introduced in 2013, suspended in March 2017 and terminated in 2018 is a case in point. Non-EU citizens were allowed to obtain permanent residency in Hungary with a minimum of €300 000 investment in special
government bonds. However, the funds did not need to be directly invested in the government bonds, but could
be transferred through intermediary companies, many of which were registered outside of Hungary. These companies charged a commission fee of €29 000 from the Hungarian State Debt Management Agency, and a service fee from the applicants ranging from €40 000 to €60 000 per application.

In December 2021, Saint Lucia Revoked Citizenship Of a certain Boniface Amadianeze Odenigbo, Arrested For Fraud by Anti-graft Agency, EFCC. It did so because Odenigbo had committed “acts that may bring Saint Lucia into disrepute.”
The EFCC charged Odenigbo and his associate, Olasunmbo Olawale, for alleged Internet fraud and money laundering. The suspects, (owners of Buzz Bar, a nightclub in Lagos), were arrested in Nigeria.

Four luxury cars, mobile devices, laptops, jewellery and wristwatches worth hundreds of millions of Nigerian naira were seized
In April 2021, The US Government published a damning report criticising the Citizenship by Investment schemes of three Caribbean countries for a lack of transparency: St. Kitts, Dominica and Antigua and Barbuda.

The CIP Programs in the Eastern Caribbean countries have been a source of continued criticism by the US and many nationals locally who question the use of “donation” funds that are part of the attractive offer for a second passport in these jurisdictions and visa free travel to between 152 and 162 countries.

To those who are thinking of making a substantial ‘donation’ so as to obtain citizenship and the perks that come with we have two words of advice: caveat emptor.