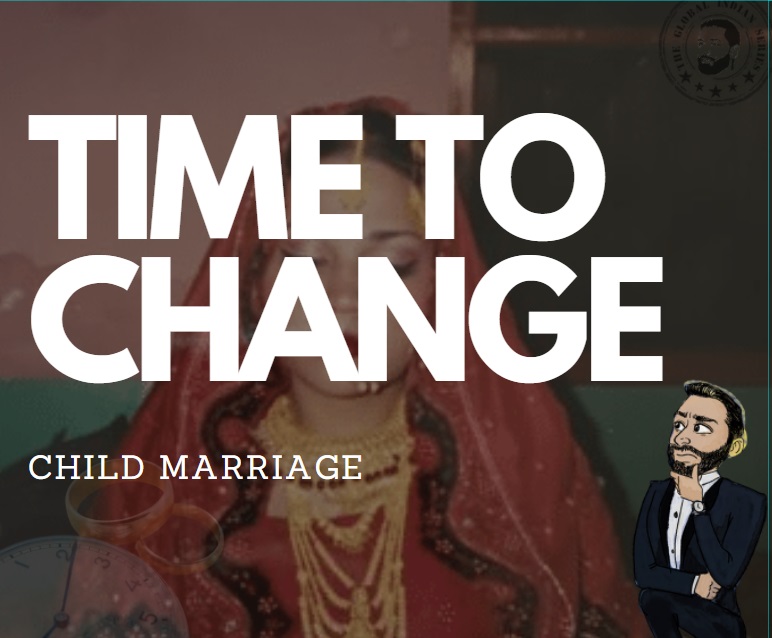 To be married as a child effectively brings childhood to an end.

And it robs a girl of the education to which she should be entitled, it forces her to deal with the trials of adulthood before she is ready and breaks most of her human rights. In short, the scourge of child marriage does untold damage. Forced pregnancy not only her risks her life but also those of her children.

Take Naila Amin, for example. Her father arranged for her to be married to her first-cousin at the age of 8. Her parents flew her to Pakistan for a religious ceremony to marry her first cousin when she was just 13. At 15, her parents took her back to Pakistan to live with her husband, who raped her, beat her, and hid her passport.

“The beating went on for an hour and a half to the point where I started to pass out.”

She managed to get in touch with a social worker in Child Protective Services in New York who helped her escape and return to the US.

“If I’m killed today, I want you to call this lady.”

To hear more of her extraordinary story, check out our podcast: https://globalindianseries.com/surviving-a-child-marriage-the-brutal-truth-with-naila-amin/

What is Child Marriage?

Put simply, it is a union (either formal or otherwise) before the age of 18.

Child marriage has the most devastating effects on children, chief among them is that it violates most of a girl’s human rights:
The right to life (many girls die in child birth)
Freedom from torture and inhuman treatment (genital mutilation and being treated as mere chattels)
Freedom from slavery and forced labour
Freedom of thought, belief or religion
Freedom of expression
The right to education

Perhaps most pernicious of all is the way in which child marriage destroys a girl’s rights and freedoms, as set forth in the Universal Declaration of Rights (1948) and indeed in the Declaration on the Rights of the Child. (1919). In short, it robs a child of the right to have rights.

And it is a problem which cuts across countries and faiths. From Ethiopia to Pakistan, from Mozambique to the USA (yes, you read that aright) it is a blight upon our world.

To its credit, successive Indian Governments have done much to stamp it out. The most important step has been that of the 2006 Prohibition of Child marriage Act, whereby it is illegal for girls under 18 and boys under 21 to marry. Those convicted of involvement face up to two years in jail and hefty fines.

Although the figures have been steadily falling, the numbers involved are eye-wateringly high because of India’s enormous population.

The Law is an Ass

Despite the Prohibition of Child marriage Act of 2006, the question of child marriage is fraught with difficulty under Indian law. It was banned once before-in 1929 under British rule, but India’s Muslims fiercely opposed it. So, in 1935 a new law was passed expressly drafted for Muslims which implied no minimum age limit. Interestingly, the 2006 law does not apply in the states of Jammu and Kashmir. Although Sharia law is not the law of the land, there have been many instances where it has been invoked and indeed applied.

UNICEF: Child Marriage rates haven been falling in India, but are they right?

Many activists such as Kriti Bharti (who runs Saarthi, a non-governmental organization that works to prevent and annul child marriages in the north western state of Rajasthan) have cast doubt on the apparent downward trend: “People have become smarter, they recognize how to evade the law [prohibiting child marriage]. They make sure it’s kept quiet.”

She further believes that many authorities turn a blind eye to the practice, putting it down to culture. So, if the law is being flouted (and it is) and not enforced (and it is), it follows that the picture is perhaps not as rosy as it seems.

UNICEF’s 2018 findings have come under particular criticism. They take issue with its key finding-that the annual number of child marriages in India has dropped by nearly half in the last decade. They say there are two problems: first, the numbers are likely to be higher than the report would have you believe. And, second, it fails to reflect the notable differences in the rate of child marriage in different parts of India.

Activists have also questioned whether those interviewed are telling the truth. It is perfectly possible to lie both to UNICEF and the Census. Indeed, the former admits that there is a good deal of under reporting.

So why does child marriage persist today?

The answer lies not only in the not inconsiderable psychological power of tradition but also in that most ubiquitous of human motivations: money.  The sad truth is that child marriage has afforded a convenient means of keeping money in a family since time immemorial.

Then there is a question of age. The size of a dowry is inversely proportional to the age of the bride. In other words, the younger the bride, the smaller the dowry. That means, if one can marry off a young daughter, a great deal of money will be saved.

Furthermore, there is a tacit belief amongst many communities in India and indeed elsewhere that once a girl reaches puberty, she is a women and should be treated as such. We have, in short, a law more honoured in the breach than the observance. This is a major problem and India is not alone in facing it

Traditions tend to go unquestioned in many parts of India and the reality is that there are many who simply do not regard child marriage as a crime. After all, this is how things have been done, is it not? Why should we change them? The inherent inertia of tradition is difficult to shift.

While many traditions and customs should be protected, Child Marriage surely is not one of them. Surely, there are no conceivable circumstances where it could be justified. Simply saying it is culture, or tradition, or custom does not wash. Tradition can indeed be a good thing, but one that rests on the exploitation of children, on cruelty and on mere money should be consigned to history