CBI in The Caribbean- Is it Doomed?

CBI in The Caribbean- Is it Doomed? 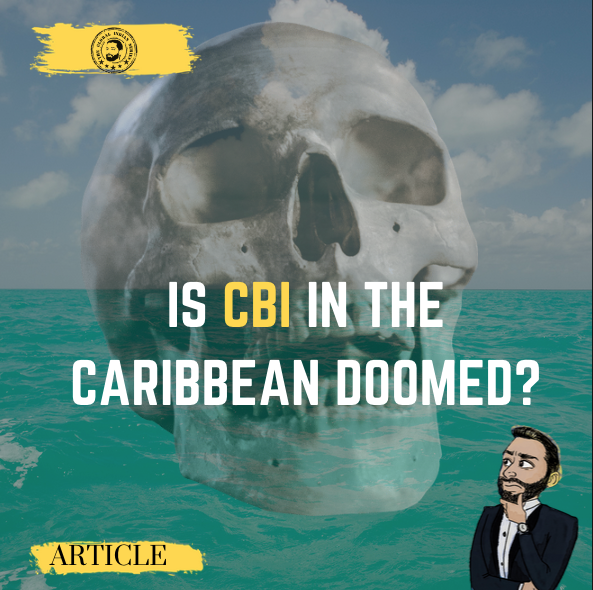 CBI has been a real boon to many wealthy people, many of them of Indian origin. In an uncertain world where anti-Indian sentiment appears to be on the rise, when many South Asians do not feel welcome in the countries which they call home and where the tax burden becomes ever heavier, Citizenship and residency by Investment has proven most useful. However, schemes across the world have been beset by problems. Corruption is rifle. The system is awash with dirty money. From the UK to the Caribbean, crooks have abused the system for their own ends, bringing the very idea into disrepute. The UK suspended its scheme with immediate effect last week, citing security concerns. The move was aimed squarely at the kremlin aid fears of a Russian invasion of the Ukraine. It is an open secret that many Russian oligarchs, many with links to Putin have bought their way into the country and have exploited the system to launder money. Hence the need to bring the UK’s scheme to an end with immediate effect.

Might other countries follow suit? CBI has yielded about .3 % of Britain’s GDP-a mere trifle. But to many poorer countries in the Caribbean, they can ill-afford to end their schemes. Why would they want to kill the Golden Goose? That the said golden goose has arguably become the golden calf cuts little ice with cash-strapped governments.

Therefore, it is highly unlikely that the 6 schemes on offer will end any time soon. But the question is: is pursuing citizenship in the likes of St. Kitts, St. Lucia, Dominica Antigua and Barbuda worth it? Does the commodification of citizenship matter to you? If so, please let us know.

We have anecdotal evidence that many wealthy people of Indian origin are not averse to the idea of obtaining citizenship in this fashion but they have grave concerns about the integrity of many schemes. Many of them find themselves on the horns of a dilemma: Do they act in their own self-interests and buy the citizenship from a Caribbean country and all the benefits that accrue from this? Or should they keep their hands in the pockets, both out of caution and for ethical reasons?

We put this question to Henley, partners one of the leading firms which specialises in what it euphemistically calls “economic sovereignty.”

The benefits of CBI in the Caribbean are impressive: visaless access to 140 countries, practically no tax to speak or and no need to even set on the island of which you are a citizen. Most of the schemes in the Caribbean are much of a muchness. They are relatively cheap (that of St. Lucia is a mere $100) they enable you to go to many countries without visas (including Schengen countries, the USA, Russia, China and the UK) the tax regime is feather light. They will all insist that they are squeaky clan-despite in some case evidence to the contrary.

Obtaining citizenship from the likes of St. Lucia or Dominica will undoubtedly make you richer and give you the entree into dozens of countries and marks for a relatively small sum of money.
However, be waned: many of the Caribbean schemes have been rocked with scandal.

It is not inconceivable that the E.U. , the UK or indeed the USA could withdraw from their visa agreement with a country if its CBI scheme is deemed to be not fit for purpose. Were this to happen, then potentially the number of countries you could visit might be slashed and one of the key benefits of obtaining citizenship goes up in smoke. In addition, if your adopted country’s reputation, suffers, so may yours. Rightly or wrongly, you may be tarred with the same brush. You may be compared to those who have gamed the system. And this could be bad for your good name and your business affairs.

This might seem like scaremongering, but it does remain a possibility. Transparency International (the global anti-corruption organization) has urged the EU to review its visa agreement with Caribbean countries time and time again. In a 2018 a joint report with Global Witness called “European Getaway: Inside the Murky World of Golden Visas,” Transparency International said recent events have “raise red flags regarding the due diligence process in some of these countries.” It goes onto say:

“In light of the risks of admitting the corrupt and the criminal, the European Union must review its visa-free agreements with these Caribbean jurisdictions and encourage governments to set high due diligence and integrity standards,” the report said. “Ultimately, if the EU is not confident in the ability of these schemes to identify and reject high-risk applicants, it should consider following Canada’s lead by suspending the visa waiver to golden visa schemes outside the EU. ”While most Caribbean countries claim to have set their houses in order, question marks remain.

Obtaining citizenship in Europe, or the USA is a much more costly affair. But unless Caribbean countries can improve their due diligence and vetting procedures, the world will view their schemes with a good deal of suspicion. It is an open secret that Brussels takes a dim view of Citizenship by Investment and to a lesser extent residency by Investment. Bulgaria has been told to phase their out. Loopholes have been found in Malta’s much-vaunted new scheme: In 2020, the European Commission launched infringement procedures against Malta and Cyprus over their schemes, noting that applicants benefited from EU citizenship without having established genuine links to the country:

Money gives you the golden key which opens many doors and there are still over 100 CBI schemes on offer around the world. However, has been dogged with problems of late and their future in the EU in particular is by no means certain.