Can you curate national identity? Inside one Guyana, one destiny with Gail Teixeira

Can you curate national identity? Inside one Guyana, one destiny with Gail Teixeira 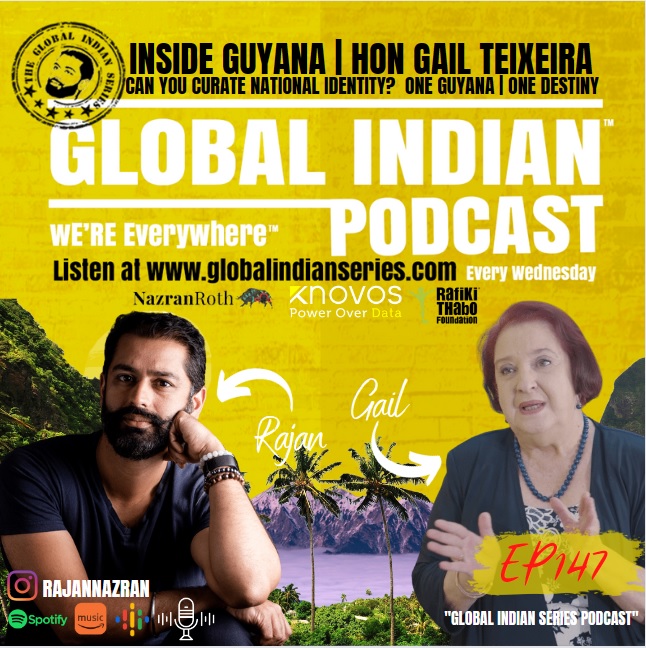 On October 12th 2022, we hosted a topical discussion with Chairman of ANUG, Timothy Jonas, where he discussed the nature of identity politics in Guyana. Subsequently the Government of Guyana reached out to exercise their right to reply. This is that podcast!

By way of context, Guyana is on the precipitous of extraordinary change. It is home to one of the world’s largest oil reserves and is seen as the “lungs of the planet”.  Unfortunately, despite this, the country seems to be cemented by deep ethnic divisions with some claiming that the nation is on the verge of apartheid between the Indian and African communities.

Today I am joined by Minister Gail Teixeira as she discussed the ideas of national identity and we look at whether the concept of “one people, one destiny” can truly end divisions.

Minister of Parliamentary Affairs and Governance of Guyana

Hon. Gail Teixeira, M.P., Minister of Parliamentary Affairs and Governance of the Cooperative Republic of Guyana, was born in Georgetown, Guyana where she attended the St. Roses High School. Minister Teixeira advanced her secondary education at the David and Mary Thompson Collegiate in Canada before reading for her Bachelor of Arts Degree from the University of Toronto (1970-1974) and her Master’s Degree in Political Science at York University, Toronto (1974-1976).

Minister Teixeira then began her political career at the age of nineteen in Toronto, Canada as an active participant in the Anti-Apartheid struggle in South Africa and the struggles for African liberation and the return of democracy in Chile, Nicaragua and her own native land, Guyana. She then chose to return to her country of birth to serve the people of Guyana and work for the improvement of the lives of all Guyanese, especially the most vulnerable and marginalized.

Between 2015-2020, she represented the PPP/C, as the then Parliamentary Opposition, on the Ministerial Advisory Committee on the Guyana-Venezuela Border Controversy among many other key roles. During the period leading up to and after the 2020 elections, Minister Teixeira was on the forefront fighting for democracy as the will of the Guyanese electorate was being threatened by a dictatorship styled caretaker government.

On August 2, 2020, Minister Teixeira was appointed and sworn in as the Minister of Parliamentary Affairs and Governance alongside His Excellency Dr. Mohamed Irfaan Ali who was chosen by the Guyanese electorate to serve as the ninth Executive President of the Cooperative Republic of Guyana. She is also currently the longest serving Member of Parliament in Guyana’s National Assembly, with over 30 consecutive years of experience.

Minister Teixeira has combined motherhood with a career of public service, underpinned by a passionate commitment to democracy and nation-building, and continues to demonstrate innovative, unconventional, daring and disciplined leadership.