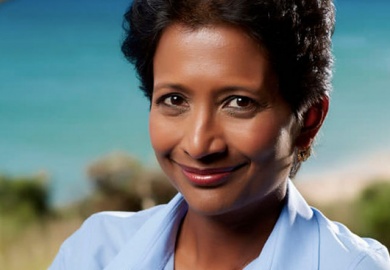 Sitting with Chitra (Chitra Stern Nee Rathinasabapathy ) is nothing short of a  soulful experience.

She is universal in her  mindset whilst being deeply rooted to her  own unique Indian-ness and simultaneously  challenges any notion of stereotypical  identity. If there were ever a Jason Bourne  of the Indian world she would be it. With  her colourful personality and melodic  accent, she proudly exhibits the cultural  layers that have shaped her own remarkable  journey of success from leaving the  shores of Singapore through to building a  gross development value of over €400-  million.  Chitra is at ease showing her lighter side as  her laughter merges into positive commotion  for her unique chain of child-friendly,  (happy) hotels. Ever since speaking to  Chitra on the phone prior to my journey  series to Portugal, I had been fascinated by  her achievements and numerous discussions  she had been invited to speak at. She  is both impeccably persuasive whilst being  genuinely down-to-earth in her approach  and interestingly, she speaks candidly  about the deeper connections that bridge  investors, communities and countries  together. For her, life is clearly based on  the power of emotional intelligence and  driving forward whilst understanding how  her own unique Global Indian identity has  enabled her to glide through societies.

Over a unique blend of organic juices,  that Chitra advises me holds a whole host  of health benefits, she invites me to listen  to her story that has shaped a nation.  Although she is far too humble to admit it.  Chitra was born in Singapore to Indian  immigrant parents during the years of Lee  Kuan Yew. She recalls her luck of having  had “top-quality education and health care  for free – in the middle of South East  Asia in the 70s and 80s,” she reminisces.  What Singapore gave her was rigorous  education, tough discipline, a strong work  ethic and religious and racial tolerance.  Despite Singapore being home, she had  her eyes set on education abroad, as she  felt that she needed exposure beyond her  immediate shores to really develop as a  person. She smiles as she recalls wanting  to be immersed in the European culture.  As such, she found herself studying  engineering as an undergraduate in  London and then going on to work at  PWC in which she qualified as a chartered  accountant. The ambition to rise and  invest in education had been instilled in  her by her parents from a young age,  especially being the oldest child of 6.  “Nothing like the responsibility of being  the first child in an Indian family. There  was definitely a duty to blaze the trail for  the others!”  Chitra’s voyage into entrepreneurship  started when she met her Swiss husband,  Roman, and how, when she was studying  her MBA they were open to the fact that  opportunities would come in all shapes  and sizes and by 1998, they had earned  their first capital investment in an entrepreneurial  venture. By 2001 they came to  Portugal to analyse opportunities in real  estate in the Algarve – “ The California of  Europe”. She recalls the compelling  factors at the time to convince them to  enter the Algarve: including membership  into the EU, key infrastructure and  industry investments and the overall  growth potential including the low-cost  airlines that were changing travel within  Europe. Besides some macroeconomic  factors, there was no doubt that there was  something about Portugal which made it  the perfect place to live and invest. I ask  her to narrow it down to one word and  without hesitation she mentions “safety”.  Fast forward to 2010 in the aftermath of  Europe’s deepest financial crisis, against all  the odds and whilst being heavily pregnant,  they finally completed their first  development and have since expanded into  3 other prime locations.  It is heart-warming and inspiring to see  how beautifully Chitra and Roman have  woven together such  distinctively different  cultures and backgrounds  and sketched  what most would only  imagine as a dream, into a reality which  today exists in the form of their family at  home, and the one they have built at  Martinhal! Without doubt the melodies of  building a better tomorrow is equally  represented through their various ventures  including an international school and a  community living development, equipped  with electric cars.  What inspires me the most about Chitra is  that she sees her role as not of a business  owner but as a developer of empowerment.  Even when we speak about female  empowerment and entrepreneurship, she  not only talks the talk but equally puts her  money where her mouth is. Chitra is  arranging a variety of empowerment  events for women in business and she  takes it on from her upbringing. For her,  Hindu mythology is full of female power  and so is the religion – Shakti, Kali, Durga  are all female powers invoked by male  Gods to surpass demons they could not  confront themselves! The  half-male-half-female form of  Ardhanareshwara is half Shiva and half  Shakti – which tells us that true power is  to be shared she tells me.  There is so much more to write about  Chitra and her story that a mere article  would not do it justice. However for me  Chitra is not only a trendsetter but a  beacon of value based success that illuminates  the Global Indian world.

For her, life is clearly based on the power of emotional intelligence and driving forward whilst understanding how her own unique Global Indian identity has enabled her to glide through societies.