A Pretty Pass for Priti Patel: Is the The National and Borders bill Dead in the Water?

A Pretty Pass for Priti Patel: Is the The National and Borders bill Dead in the Water? 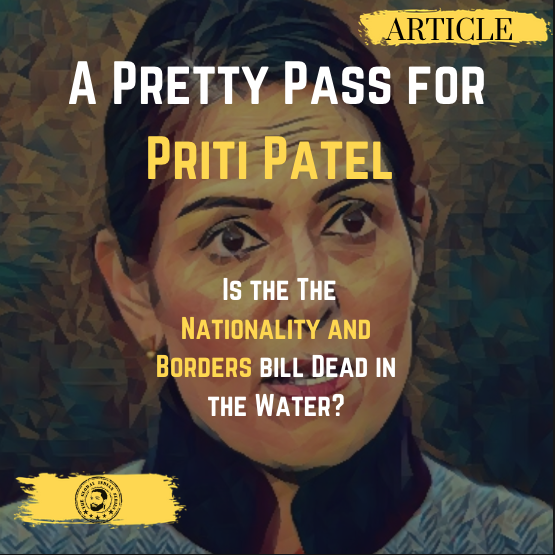 Let joy be unconfined. Wiser counsels have prevailed. This week the Lords have voted down four controversial clauses in the Nationality and Borders Bill by a majority of 78.

The Lords Temporal rejected all four, including Clause 9, as indeed did Baroness Warsi, who was the first Muslim woman to serve in the Cabinet.

Clause 9 (by which the government would have powers to strip people of their citizenship without warning) and plans to treat asylum seekers differently depending upon how they arrive to Britain’s shores were rejected.

Of Clause 9clause, Labour Peer Lord Dubs (who escaped Nazi Germany as a child) said that it was ‘nonsense’ and ‘unworkable,’ a sentiment echoed by Lord Kerr, who said, if the law were passed, it would prevent Ukrainians seeking sanctuary in the UK. This would break international law and be an unforgivable moral crime, not to mention it would sully the UK’s reputation as a safe place of sanctuary for asylum seekers.

Had the motion being carried and the provision became law, it would have created a dangerous precedent. It might have emboldened other countries to follow suit, despite the fact it contravenes international law.

Baroness Warsi: Clause 9 would have made she and her family Second-Class Citizens

Clause 9 triggered protests at Parliament and has drawn criticism from across the benches. Baroness Warsi said that the provision would make her and indeed her children ‘Second-class’ citizens. Those who rejected have thus prevented a bad law becoming worse. And we salute them.

Lord Kerr tabled a number of amendments designed to restrict the number of circumstances where notice can be withheld and help remove the subjective element from the clause.

The state still retains the power to revoke citizenship, and needless to say there are exceptional circumstances where doing so is justified. For example, warning a British terrorist under surveillance either in the UK or abroad would compromise the operation and be contrary to the interests of national security. This is not unreasonable and there are many international precedents for it. Thee New Zealand Citizenship Act of 1977 is a case in point which allows for notice of deprivation to be dispensed with if it would be for any reason “not practicable” to serve it on the subject. The Australian Act of 2020 does much the same.

Under the new proposals, there would be more safeguards. For example, if the Secretary of State wishes to withhold notice, she would be obliged to apply to a superior court of record in advance or within seven days. This clearly is a good thing and will be welcomed by British ethnic minorities, not least the Indian Community.

So too is the right to appeal. Amendment 18 provides that time for appeal will begin to run only once notice has been given, thus making it unnecessary to rely upon the discretion of the court. This strikes us as eminently fair. Let us hope the Commons approves them.

It is worth remembering in this regard that powers to deprive British citizens of their citizenship were greatly expanded in 2003, 2006, 2014 and 2018. They can be invoked in the case of British citizen who has dual nationality, where the Secretary of State is satisfied that deprivation is conducive to the public good.
As the leading immigration law silk, Raza Husain QC has this to say on the state’s beefed up powers:

“This progressive extension over the last two decades has meant that it is no longer necessary to demonstrate that someone is a terrorist or a traitor before stripping them of British citizenship. Individuals may be deprived of citizenship on general public interest grounds of the sort usually invoked to justify deportation, rather than on the basis of their severing the bonds of allegiance that are the hallmark of nationality.”

In its original form, Clause 9 drove a coach and horses through that most inviolable of safeguards—that of notification —really at the Secretary of State’s whim. The amendments that have been tabled have put this right in principle. Whether they will be adopted remains to be seen.